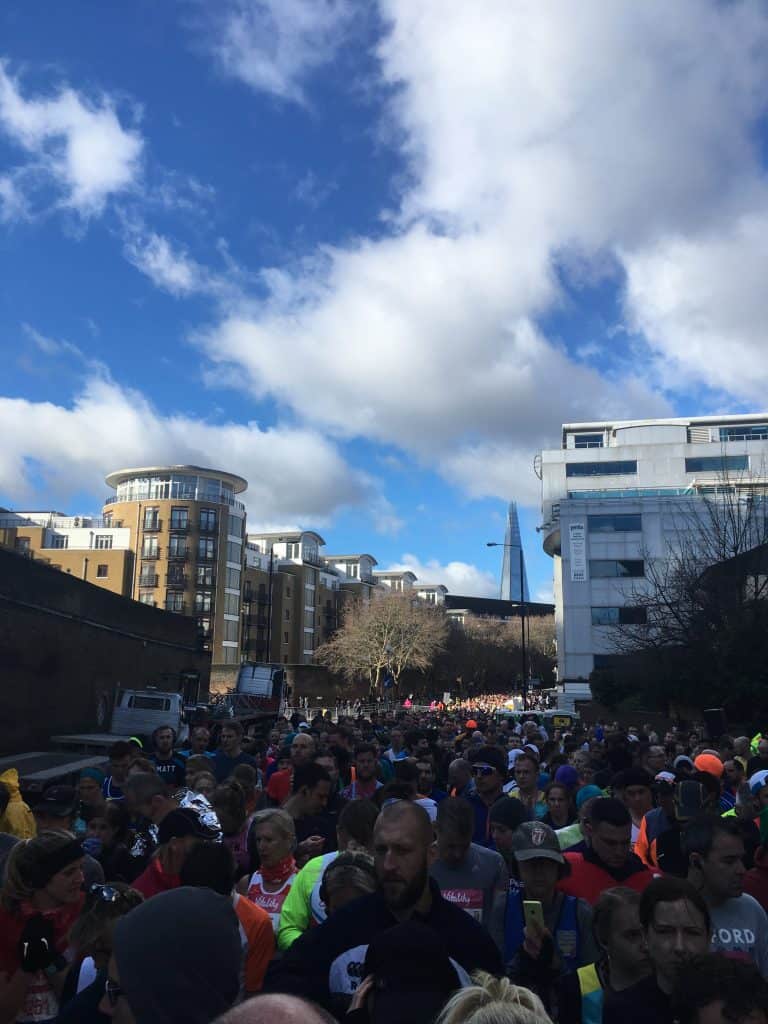 This is the second year of the half marathon organised by the organisers of Virgin Money London Marathon, the Prudential RideLondon festival of cycling and Swim Serpentine.

The entry was via ballot and is purposely very timely for the upcoming London Marathon. The general entry fee was £39.00 (£35.00 for members of a British Athletics affiliated running club). Entry fee for runners from the four boroughs the run passes through was £30.

It was a 6 am alarm. Luckily I set two alarms as I fell asleep after the first. My kit was sorted so I pulled it on, necked a cup of tea, scoffed some porridge oats and a banana. The trains were on bus replacement (as ever), so it was a local bus then the Northern Line tube to get to London Bridge. I was a bit early and had 50 minutes to kill until the bag drop closed at 8.20am.  There was no way I was stripping off yet in the wind and drizzle.

I grabbed a coffee and did some people watching. Watching runners prep for a race is always interesting. People pinning on their numbers in gale force winds, a guy who bought some carbohydrate power on the way trying to feed it into a bottle in said wind and rain ( he may have been about 40% successful) Also, a hell of a lot of people wearing Nike Vaporfly 4% Flyknit. A lot of money being splashed on some very expensive footwear.

Pushing it as late as I could, I stripped off, checked I had everything, dropped my bag and wandered across Tower Bridge, passing the Tower of London towards the start which was at 9.00am.

I wore my Ronhill Infinity Cargo Shorts, the outer part of my On Hybrid Shorts, Wimbledon Windmilers vest over a long sleeved compression top and Nike Epic React shoes.

The weather was blustery with gale force winds. Luckily the rain stopped and the sun came out whilst in the starting pens. The elites were introduced and on time we were off. I was the second wave, only 5 minutes behind the gun.

One point about the music at these events. Not every song played has to have “run” in the title or lyrics for it to be played at a running event. I heard – Runnin’ by Naughty Boy/Beyonce, Born to Run by Bruce Springsteen, Dog Days are Over by Florence and the Machine (lots of run in the lyrics). Good tunes, but the same as the most events I’m at. There’s plenty of other great inspiration song that can be played. Try to mix it up. 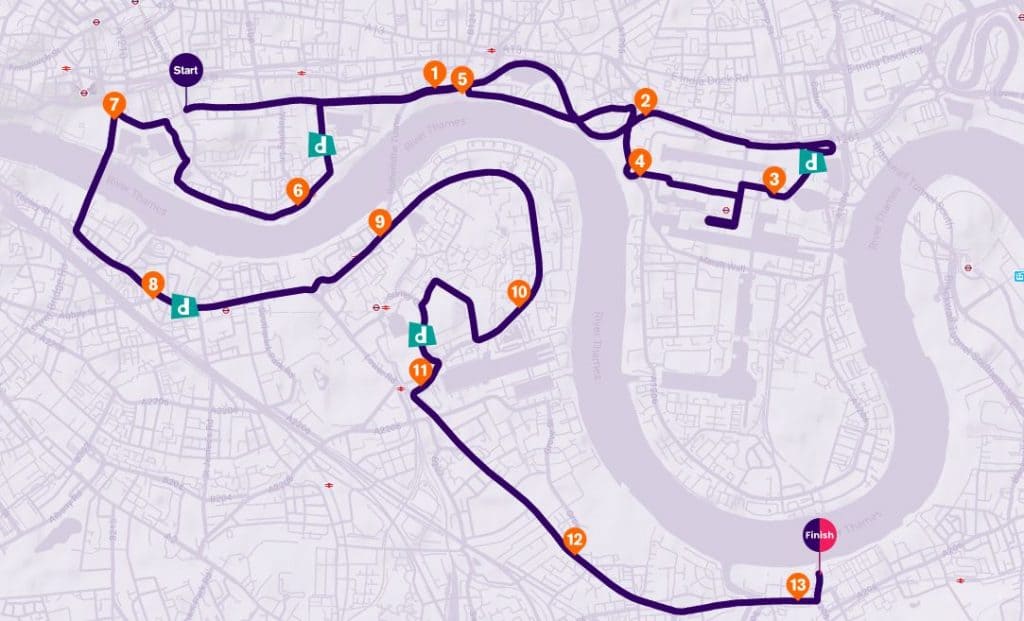 Think of the route as a chunk of the London Marathon route, in reverse. The first 5 were along the Highway, through the Limehouse Tunnel Link, around Canary Wharf and back again.

The plan was to run at my marathon pace of 9 min /miles. I really did try to. It’s hard not getting caught up in the fast pace of the start. Standing in the cold for 30 minutes, my legs were pretty dead when we set off. Having the Limehouse Link Tunnel after the first mile was pretty useful due to the weather; it got the runners out of the wind. I went in cold and came out the sweating after the warm 1-mile tunnel.

It was mile 3 before I realised that I was going too fast and it was a (half) marathon, not a sprint! I relaxed and moderated my breathing to a regular and maintainable pace. Many to the early miles were in and around Canary Wharf where my Garmin was all over the shop due to the buildings (I’m guessing this is where I picked up the extra 0.2 of a mile).

Around Wapping, across Tower Bridge (the wrong way), along Jamaica Road in Bermondsey, then through Rotherhithe.

Following some more non-descript roads, one of the highlights and this race and the London marathon came up, Tower Bridge. The highlight of today’s race was making it across it ! A one point I nearly came to a halt as a big gust of wind hit me and spent the rest of the time running diagonally as not to end up the barriers. I thought to myself as I crossed it – the next time I cross this bridge, it will be nearly halfway through the marathon. Fair play to the cheer squads standing and supporting on the bridge.

There were a lot of lost hats and visors lying on and around the course. One lady’s hat flew off right in front of me, I nearly bent down to pick it up, but she did not even flinch and just kept charging.

I knew there were a 3 miles straight drag coming up to continue focussing on my pacing. I used the mantra “Keep it easy”. I took a gel at the hour mark that gave me a boost. My splits were very consistent.

One piece of excitement was the drinks station, near Mile 8 and the prospect of a Lucozade Sport Ooho. These are the new eco-friendly seaweed-based edible packages that deliver you a 25ml shot of Lucozade sport. The “blobs” are fully biodegradable, as well as vegan and allergen free. I grabbed one, popped in in my mouth, bit down and consumed the energy boosting goodness. Good work from Lucozade in reducing plastic.

Over to Surrey Quays, a left on to a long drag through Deptford finishing up in Greenwich and the Cutty Sark.

In the last few miles, I was feeling okay. The wind was behind me and was helpful in keeping the pace up. My mind fluctuated from “Go for it” to “Back off and pace yourself”. I probably fell somewhere in the middle, jockeying for position with the runners around me. The miles passed quickly as I concentrated on staying with the passing runners.

The support on the course was fairly sporadic. It was not the best day to be spectating; however, the downhill run-in to Greenwich and finish towards the Cutty Sark was packed and loud. It was quickly upon me and I turned the last corner, opened up my sprint, saw the wife, tried to pose for action shot (unsuccessfully) and crossed the line.

Chip time – 1:44:43 – I would have taken that time before the race. I had very slight visions of a new PB but was 2 minutes off in the end. That’s no great shakes, today was prep the big one. With all my protestations about slowing down, I felt good throughout the race, especially in the last two miles where I normally falter. 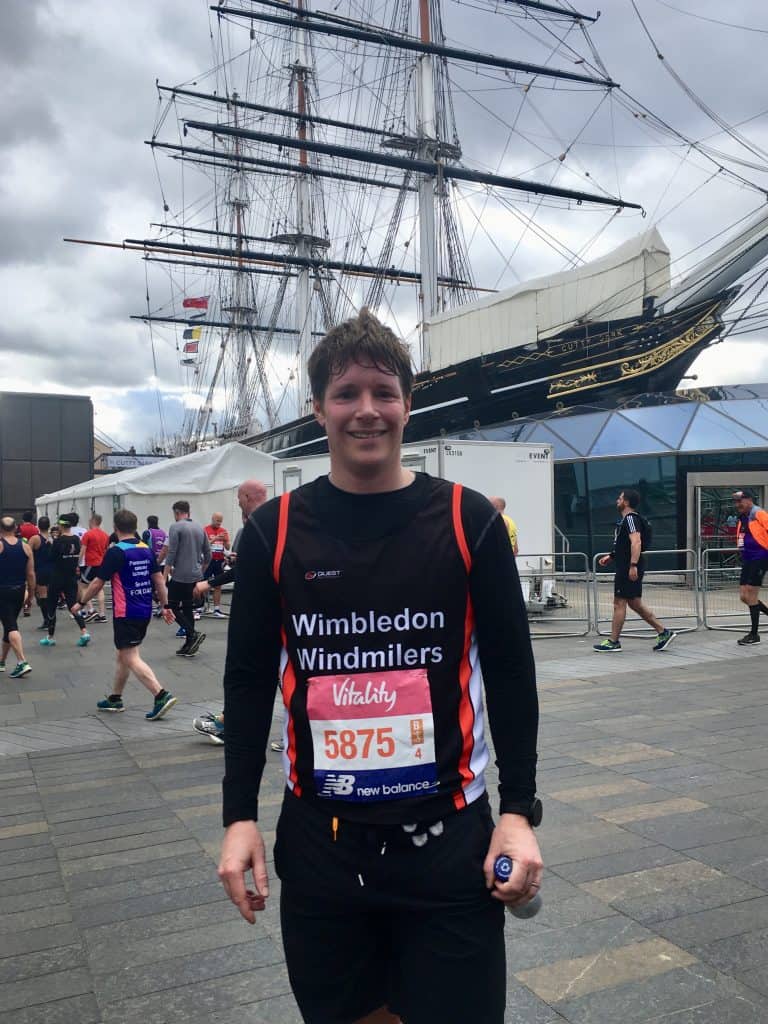 I collected my medal, goodie bag and bag from the bag drop. At one lorry (not mine, fortunately) the crowd in front was 6-8 people deep with everyone holding the race numbers above their head, desperate to get their bag. I waltzed straight up to my lorry and quickly dressed as the wind was biting. Unfortunately, the Big Half festival and event village were closed due to high winds (it was snowing last year) and therefore the meet and greet got moved. I played phone call tennis with the wife, and we got finally each other on about the 10th call, then slid into a coffee shop to rest, warm up and have a scone.

The organisers, London Marathon Events Ltd. do recognise that London’s running events don’t reflect the communities they run through. The aim of the Big Half is to bring together Londoners of all backgrounds, no matter what age or running ability and support and encourage first-time runners to take part. This goal is respectable and what these events should be about.

The race was well organized and is essentially a half London Marathon. The route is not the prettiest. The bit everyone remembers about the London Marathon is the Embankment, Birdcage Walk and the Mall, not the preceding 23. For such a big race (possible 20,000) it was not congested and the field quickly spread out. The starting pens entrances were marshalled, but it was fairly simple to walk down the side, find a gap in the barriers and jump in. The toilets in the start pens are a good move. The smaller water bottles are an improvement, but still a massive amount of plastic being flung around. The water bottle distribution was first class. The medal is funky and very different. The finisher’s t-shirt is standard and not very interesting (surely there are better designs to be had.)

A good race and addition to the London calendar which will be very popular due to the draw of running in a big field on closed roads in London. The organization is first class as you would expect. The cancellation of the Big Half festival and closure of the event village was unfortunate but a good call with probable bits of trees flying around. Hopefully, they have better luck with the weather next year.