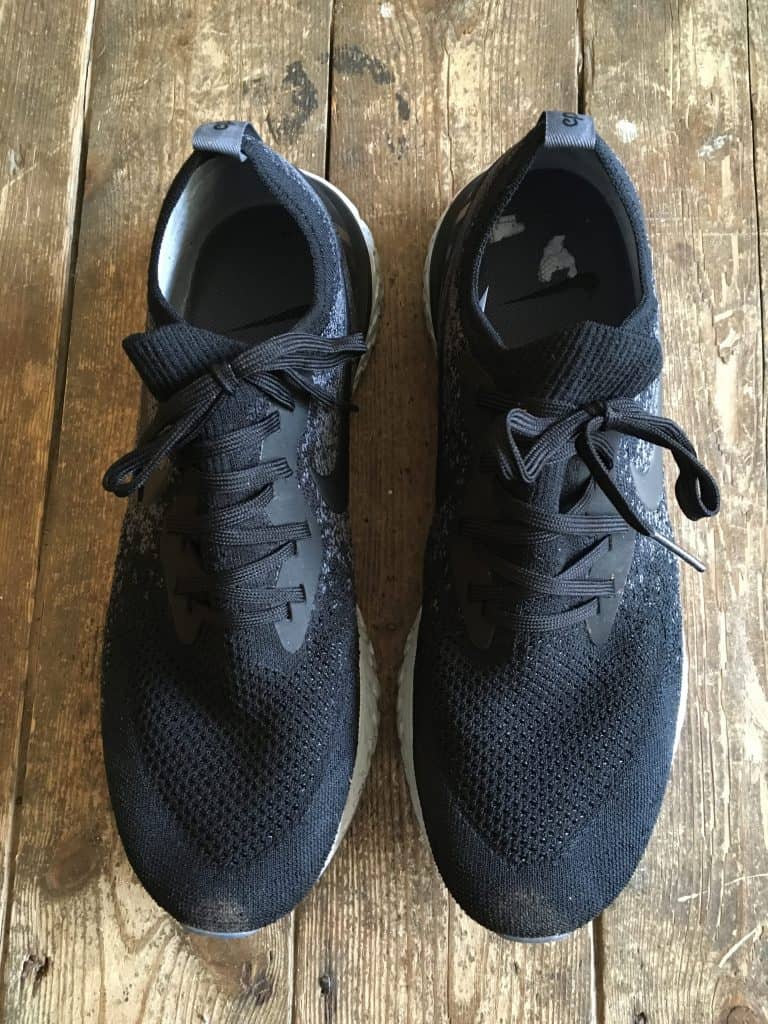 I spend too much time looking at running shoes. If I have 10 mins, I will go to the usual websites and look for new deals, colours or styles. I’m a Nike man through and through. The only non-Nike shoes I’ve bought in the last 10 years are the On Cloudventure, which I really like and are a specific off-road shoe. I reviewed them here.

Recently I’ve been looking at the Nike Pegasus 35, Nike Pegasus Turbo and Nike Epic React Flyknit. On a bored evening, I saw the Nike website had reduced the Nike Epic React to £77, knocking £50 off the normal price. With an extra 10% discount (I can get and free shipping), I quickly ordered a pair.

Ever since the Adidas Ultraboost came on to the scene a few years ago, Nike has been playing catch up. The Ultraboost become popular with serious runners but also crossed over to be a lifestyle shoe. They were stepping into Nike’s territory. The Epic React is Nike’s response. The newly developed React foam gives runners as Nike claims “the lightest, softest, smoothest and most responsive foam Nike has ever produced”. By combining it with the Flyknit upper, Nike has given it that aesthetic edge for it to cross over into other markets.

I got the Black/Dark Grey/Pure Platinum/Black colour. In reality, from above, they look black as opposed to the marly grey/black on the website. They look long and wide at the bottom and the upper looks narrow due to the “bootie-style construction”. I have always like white soles so they look good and feel very light. 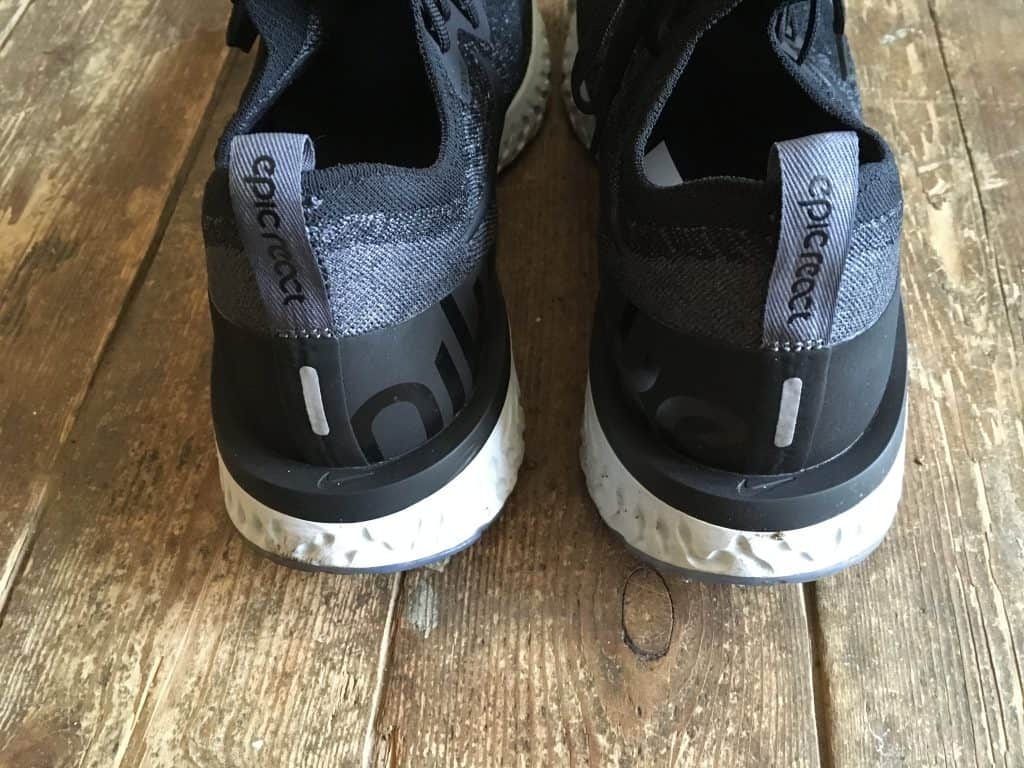 Nike Flyknit (the single piece of seamless mesh rather than the traditional cut and sew) was inspired by feedback from runners craving a shoe with the snug fit of a sock. This results in reducing material waste by an average of 60%. Also, the equivalent of six recycled plastic bottles is used in every pair of Flyknit shoes, saving millions of kilos of material from reaching landfills.

Pulling them on can be a bit tricky as the tongue is part of the upper and they are a bit tight, but once you’re in and with a bit of sock rearrangement they feel comfortable.

I have steered clear of the sock like shoes for a while, thinking one, my feet will get hot and secondly, they will lack support leading to easily rolled ankles. I have done 6 runs in the Epic Reacts and my feet have not got too hot (it is winter though) and they have felt very stable. Although odd and flimsy looking when you are standing looking at them, once you’re running the support is there and they feel great.

One thing that I have liked in my recent Nike Pegasus and Nike Wildhorse is the Flywire cables. These are little wires that run down the shoe from where the laces are and when the laces are pulled tighter, the whole of the upper is pulled in, hugging your foot. The Epic React don’t have the Flywire set up (due to the Flyknit setup) and I found because of this, the laces on the Epic React pinch the top of the foot, especially after a couple of miles when your feet have expanded a bit. Nike states “….the tongue is seamlessly part of the upper. This eliminates the pressure a traditional tongue puts on the top of your foot”. I found the opposite. The Flyknit does most of the work so the laces are kind of surplus to requirements.

Inside the shoe is a synthetic suede heel lining. This adds structure and is there to help prevent heel slippage and blisters. On first sight, I thought this was ripe for causing me an issue due to bone spurs on the back of my heel (I normally end up wearing a hole in “traditional” running shoes) but so far there have been no problems and it does hold the heal nicely. 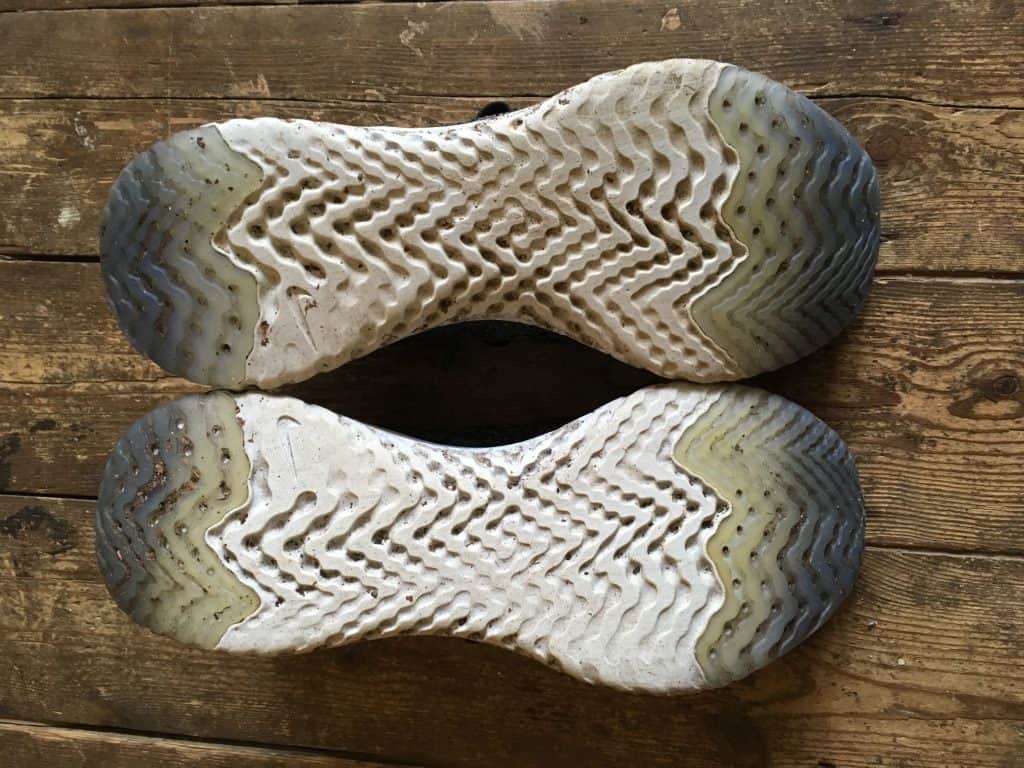 The sole doesn’t look that grippy. Nike states “To keep the shoe as light as possible, traction is placed only where critical. Based on data, rubber sections on the toe and heel help you grip the ground and push off”.  Again on first impressions, this looks like a disaster waiting to happen on a wet road with wet leaves. I’ve been out in the wet every time I’ve worn the Epic Reacts they have actually felt grippy, similar so my Pegasus 34s. They’re definitely road shoe though and far too pretty to get dirty anyway. 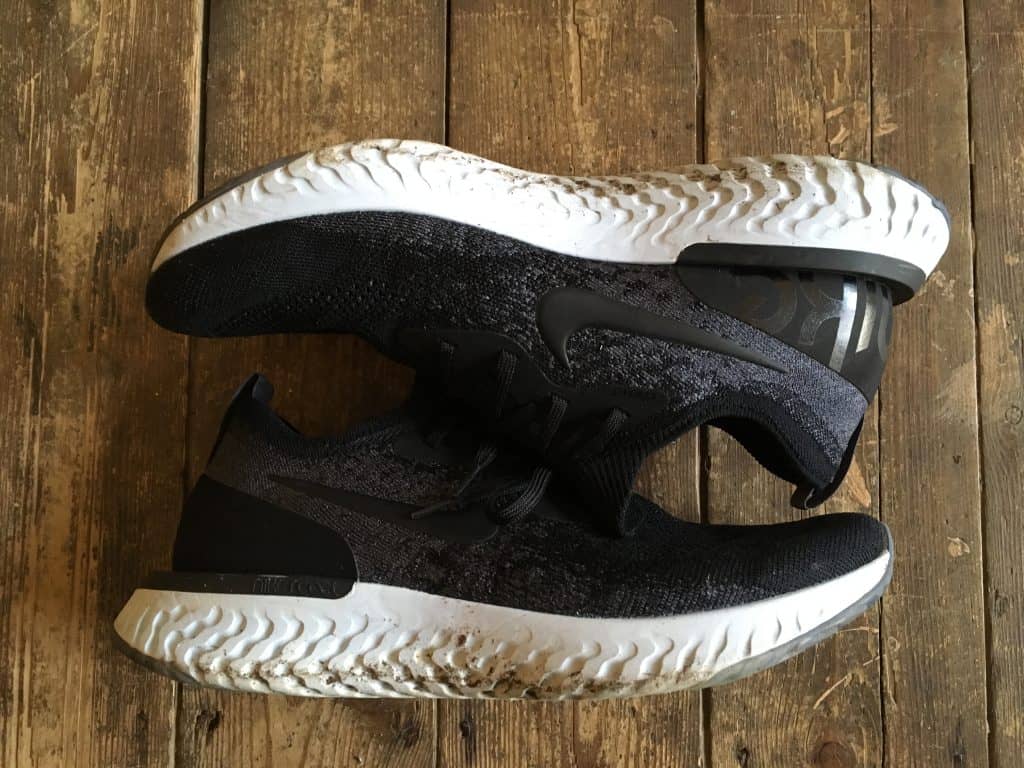 I got confused with all the marketing about whether the Epic React had some of the Vaporfly 4% (Breaking 2) tech in it. To clear things up, it doesn’t. More Nike bumph – “Specifically designed for speed, Nike ZoomX (in the Vaporfly 4%) delivers our greatest energy return in our fastest line of running footwear. Nike React foam offers a combination of four key benefits—softness, responsiveness, lightness and long-lasting durability—in one single offering”.

The sole definitely looks thick. Part of this is that the shoes are supposed to enhance the feeling of moving forwards (not sure if that is true or because I read it) and so the cushioning at the back is fairly thick sloping forwards. Stood still the cushioning does feel spongy, but on the road, they feel firm and responsive. In developing the Nike React foam, one of the aims was to make the foam more hard wearing and for the cushioning to still feels like new after roughly 300 miles. I can’t vouch for that but in my 6 runs, but have found them to be very comfortable. I’ve only ran up to 6-7 miles in them so far, but feel they’ll come into their own on longer runs.

The Epic Reacts feel super lightweight and on the run, very speedy but are (apparently) training shoes to put the miles in. The most important thing in a running shoe is that it has to be comfortable to run in, and in that case, the Epic Reacts are a winner. A great pair of go-to everyday running shoes which still have enough zip for a speedy 10km. They also look pretty flash so after your run you can pop out for food with your jeans on.

….getting the training miles in whilst wearing a comfortable, cushioning and good looking shoe.