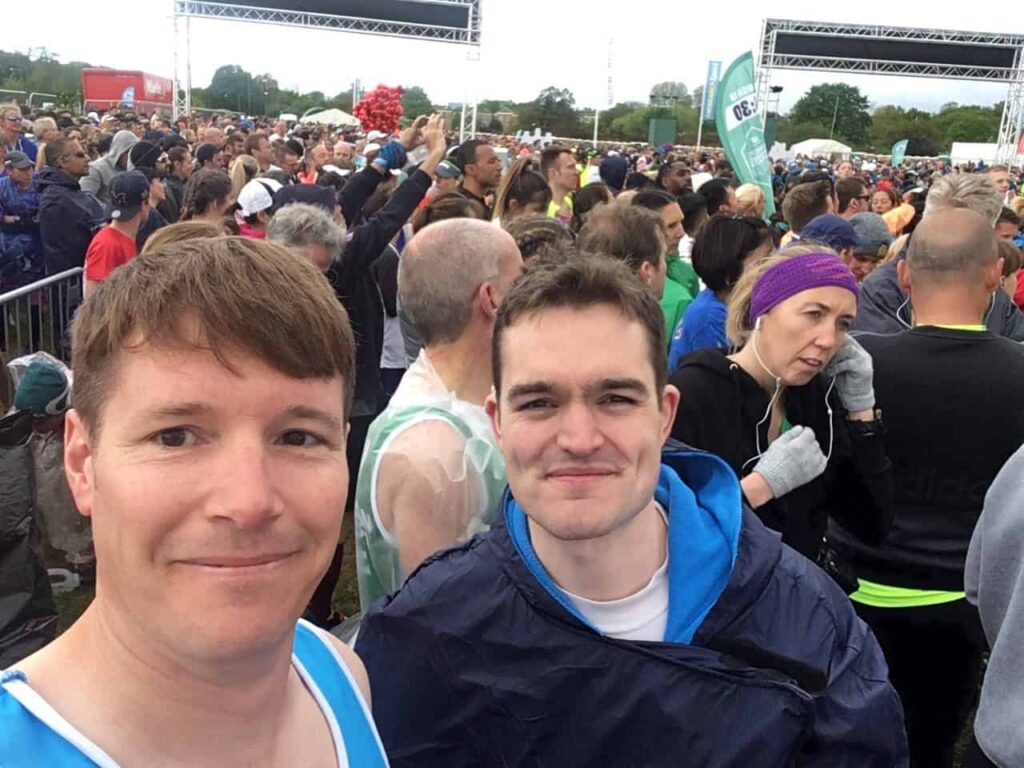 I’d been building toward the London marathon for 17 weeks. If truth were told, I probably started before then but got a little more serious before Christmas. I talked about my build up in my post here.

I spend the week before the race with four days in Poland and four in Athens, Greece. The time in Poland allowed gently runs along the beach and a blast around Gdansk parkrun. Athens was great but not ideal prep with lots of walking up hills and a bumbled 2-mile run where I ended up stuck between a maze of dual carriageways. 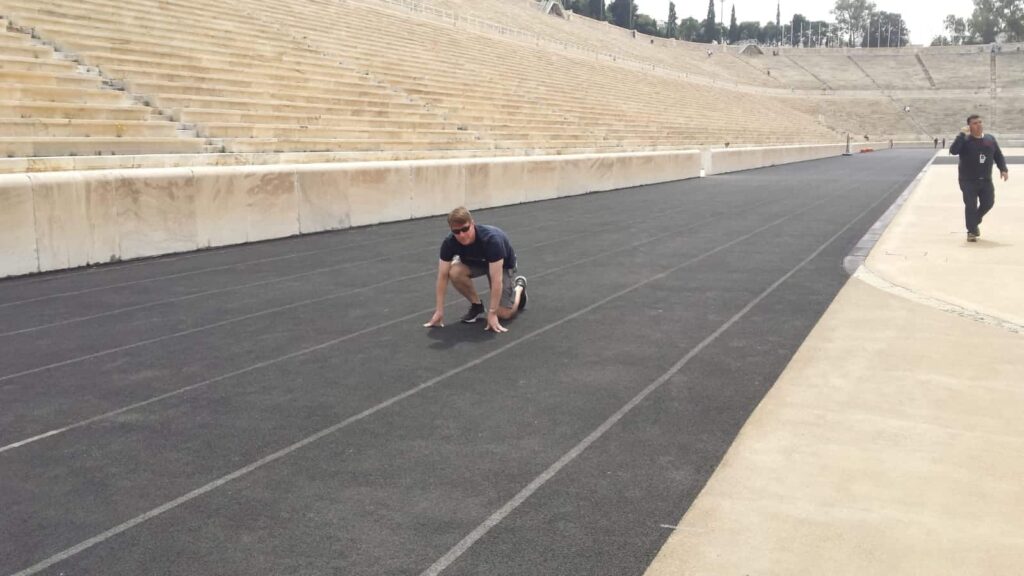 I got home at 1am Saturday morning and went to collect my number first thing in the morning. It was busy at the Excel. I did a lap of the stands and then queued to get back on the DLR. I was conscious of the time I was spending on my feet. Whilst heading home, I collected my Mum from the train station and put my feet up. In the evening, I faffed for hours, slowly collecting together bits of kit.

In the morning, I crammed some porridge and a banana into a nervous stomach, tried to balance taking on fluids and the need to go to the toilet every 2 minutes. Before jumping on the bus, I necked an espresso.

I’ve talked before about my interest in the body language and mannerisms of runners on their way to a race. I shared a carriage with a guy and his Big Ben costume, having no idea he would soon become an internet sensation. On the train, there were nervous smiles and a lack of eye contact as everyone looks around, checking on what others are doing. A girl sat across the aisle from me and proceeded to anxiously install her timing chip to her shoe. After 3 attempts and 10 or so minutes (whilst making us surrounding runners more and more nervous) the couple opposite her intervened to help and calmed us all down, and we could disappear back into our own heads.

I was at the Green start and following a change a Waterloo and London Bridge as well as a toilet pit stop into a just opened pub, I got off at Maze Hill. There’s a funny thing about places with the name “Hill” in them. They normally involve a hill! This was indeed true and I proceeded to talk a 5-minute walk up a steep hill to the Green start.

I was running for WaterAid through a charity place via my work and met up with a number of my colleagues at the start that I had not met before. This was nice. There are plenty of races I go to, at which I end up not talking to anyone. Having a couple of people to waffle to helped deal with the nerves and pass the time.

I got into my pen with my colleague, Harry (pic at the top), 10 or so minutes before the first wave set off at 10.10. We were in the 3rd wave, going 10 minutes after that. As we shuffled forward, a stream of people peeled off into an alleyway to go for a last second toilet break. Once one person breaks, everyone follows, and so did I. I, therefore, lost Harry but was back in the pen with a few minutes until we were off.

We were released, and I sent off on my 26.2-mile journey. There’s a huge risk of setting off too fast for a marathon, which I was massively aware of LINK. My pace was similar to the runners around me, which helped manage the desire to go crazy. For the look of my splits, I did set off fast, but these were the sorts of times I was holding comfortably in training, so I was not too worried. I felt relaxed and calm. I sucked down my first gel and had the Cutty Sark to look forward to. 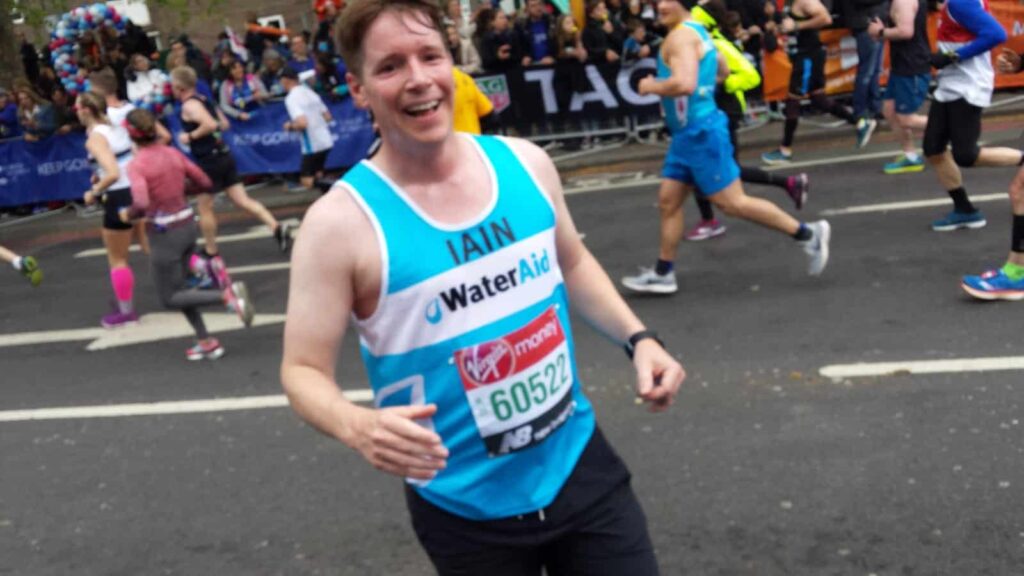 Following the buzz of the Cutty Sark, was the nondescript area of Rotherhithe and Bermondsey. I kept my head down and the legs moving. Mantras are an important part of marathon running. These are little sayings that you repeat to yourself over the miles to motivate or remind you why you’re running. I didn’t really have anything in mind before I started, but a few came to me. “Keep them ticking” was one. This was just to stay calm and maintain my pace, which I think I did, knocking out the 6 miles within a range of 11 seconds.

I’d agreed to see my wife between 11 and 12 miles, around Bermondsey tube stop. Looking out for her and my Mum helped pass these miles as I kept an eye out for them, scanning both sides of the crowd. I heard my name and saw my wife, having to do a 180 to turn and get to them. I gave them a sweaty kiss and saw the sign my wife had made in the morning. I set off again, had a gel and a spring in my step with Tower Bridge in the distance.

Tower Bridge is one of the major landmarks on the route and almost marks the halfway point. The crowds form a tunnel of noise across the bridge with a number of charity cheer squads based there. It really is a highlight of the London Marathon. After the high, comes the focus of the middle miles. Miles 13 to 14 is one of the few points where you can see the runners in front of you (passing between miles 21 to 23). I missed the Elite men but saw the good club runners who were going sub 3. Some of the guys looked to be in pain. Running that fast looks excruciating. 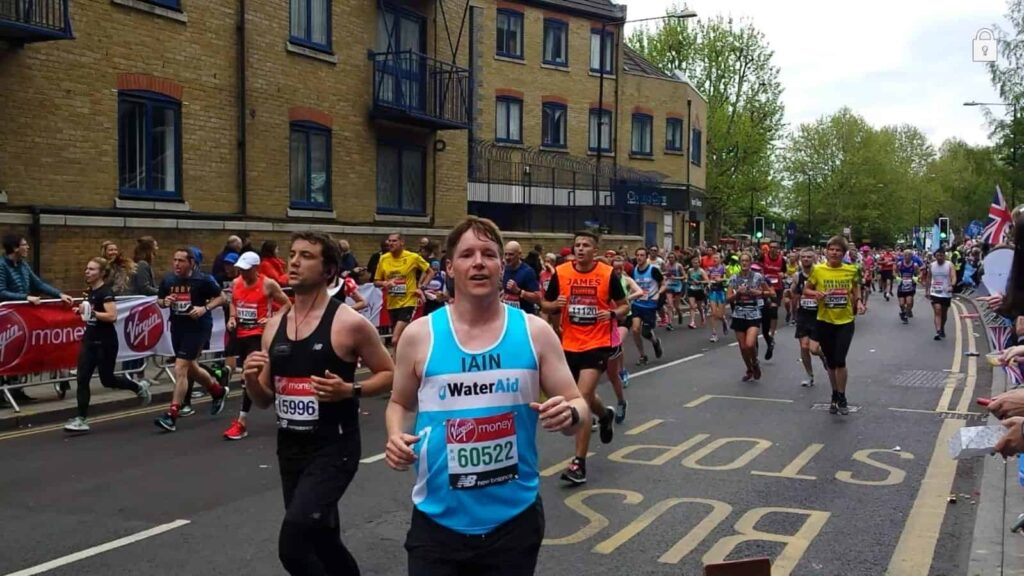 The plaster over my nipples had started to come unstuck. The thought of another 13 miles with no plasters was not a good one. I found a St Johns Ambulance crew who gave me two which I quickly put on. I was still feeling good and happy that the miles were clicking off. I didn’t expect to see my wife and mum again until the finish but was surprised to hear them screaming my name again around mile 17. I said “Hi” again and shuffled off. I was slowing slightly, but still going ok.

The crowds were phenomenal. From the first mile onwards, the roads were packed. It’s why this marathon is so special. Boston may be the first, New York the biggest and Berlin the fastest, but London has to be the best supported with the biggest crowds. I’m not sure what happened through mile 20, a bit of a quick one. Maybe slightly downhill, a GPS error or the calm before the storm. The wheels were not coming off, but they were getting a little wobbly. It started to hurt.

Around mile 20, I really started counting down and looking for landmarks. 40 minutes to go, 30 minutes to go, just 20 minutes more. I was surprised to look back at my splits and see I was still fairly consistent through miles 21 to 23. With 3 to go, I knew I would/should make it in sub 4. I had 40 minutes to do the final 3 miles. Where the hell was the embankment? Once I made it there, I knew where I was. We finally turned left and were next to the river. I just had to keep moving. I really wanted to walk, but I’d made it this far so was not going to stop. The shouts from the crowd of “Go Iain”, “Looking good, Iain”, “Iain, you got this” kept me going.

Big Ben or Elizabeth Tower (previously St Stephen’s Tower) came into view. It looked a long way away. The embankment is the best bit of the London Marathon due to crowds and support, but also the worst as you’re feeling at you’re most terrible. Now I really put my head down and ground out the last few miles. I really relaxed in the last mile, hence the only 10-minute split. I reached Big Ben shrouded in scaffolding, turned into Birdcage Walk, which went on forever and then the beautiful right turn at Buckingham Palace onto The Mall. I gave it whatever I had left, which was not a lot and judging from the BBC iPlayer, I very nonchalantly crossed the line and slowed to a walk. No raised arms, just happy to have finished and within my goal time. 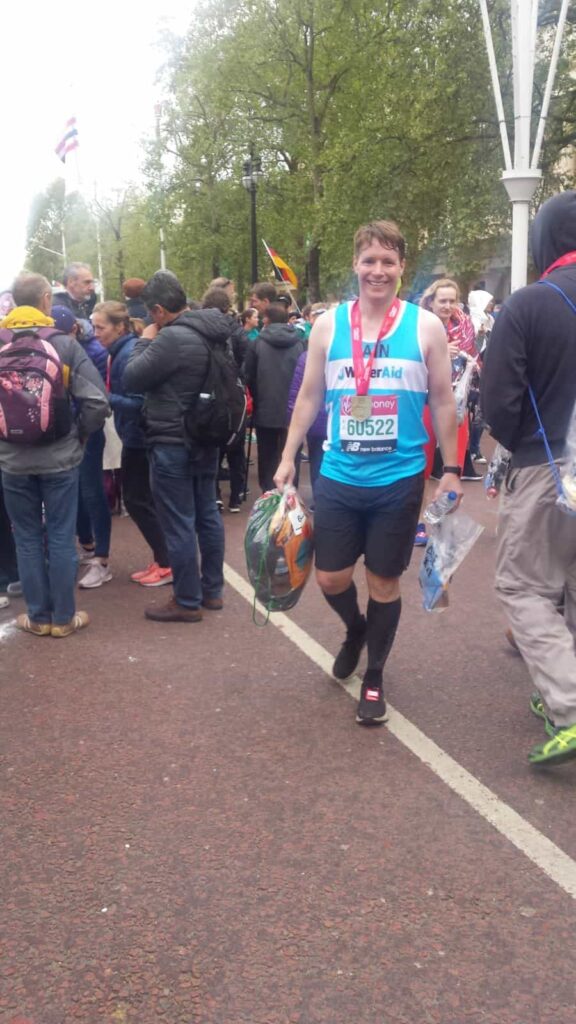 My finishing time was 3:39:13. A 37 minute PB. I was ecstatic but too exhausted to actually be ecstatic. I collected my medal, had my finisher photo taken (in which I was not in the middle and will not be buying) and slowly trudged to collect my bag. My wife met me at the end of The Mall and we headed off to the WaterAid post-race event just behind the National Gallery. The offer of a massage was kindly taken and was an absolute godsend. From struggling to walk beforehand, I was able to take the stairs afterwards. I saw Harry (from work) at the reception, who finished in a simple time and we exchanged our race details over a cup of tea and a packet of crisps. Lisa who had organised the work team appeared and we chatted and got some photos before heading off to get a beer.

I regularly describe London Marathon Day as the best day of the year. I love running, watching running and it’s so motivational. I get why I love it. But, I figured out why else I think this. Whilst outside the pub, I struck up conversations with 4 or so different people. Smiled and chatted to two policewomen on the walk to the train station and then ended up talking to a fellow Wimbledon Windmiler on the train who we then to the Windmiler Post Marathon drinks with.

London Marathon day is like it was during the 2012 London Olympics. There’s that feel good feeling. Everyone has a common topic and are there for the same reason. It’s easy to and people are happy to strike up a conversation. Love it! 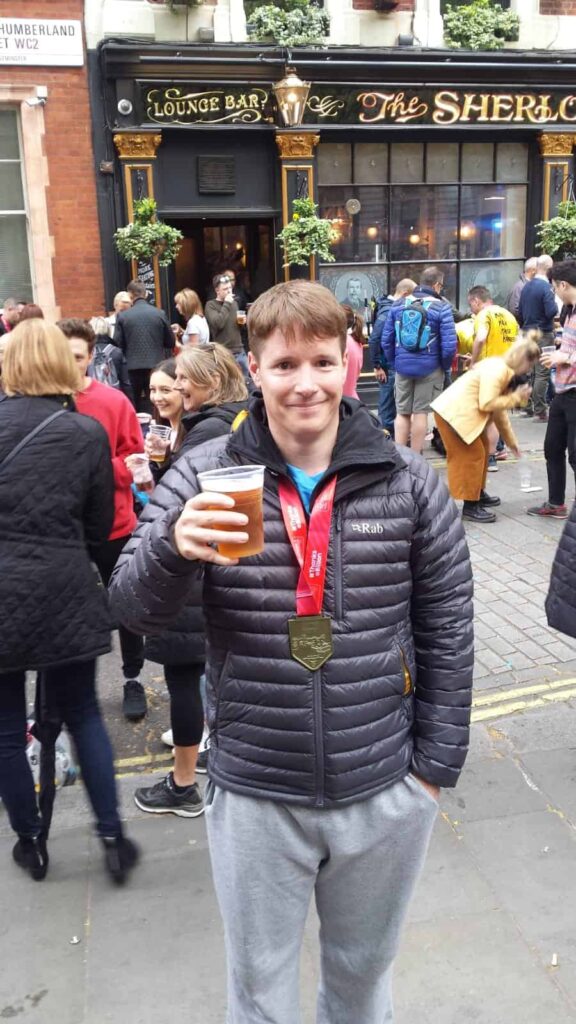 In the days since the marathon has passed, my thoughts have turned to what went well and not so well. The continuity and consistency of my training went well. There was no discussion about going out for a run. I managed and was serious about my recovery and stretching. This was important. I can’t just keep blasting out the miles and expect to maintain my body and energy. I got to 20 miles feeling fairly comfortably, which backs this up.

I could have been better rested in the build-up to the race. Athens was fantastic, but we did do a lot of walking. My diet was not on point. In the latter weeks, I think I put weight on. I felt heavy and bloated. Some of my food choices were not that great.

Since I started this blog, I’ve um’d and argh’d about doing a marathon. This was my first in 9 years and came away with a huge PB. So it’s back to the same question. Will I run another? I’ve entered next years ballot. I‘m not sure if I’ll be too bothered if I don’t get in. A marathon is tough on the day, but also in the months leading up to it and you have to have kind support from family.

What’s next? I think I’m going to focus on my half marathon and 10km times and use the stamina I’ve built it this training block to see if I can knock them down.

I enjoyed the “best day of the year in London”. I met some colleagues, had a very enjoyable 20 miles, showed I’ve got some grit on the last 6, chatted to plenty of people, went sub 4 and got a huge PB. A good day!