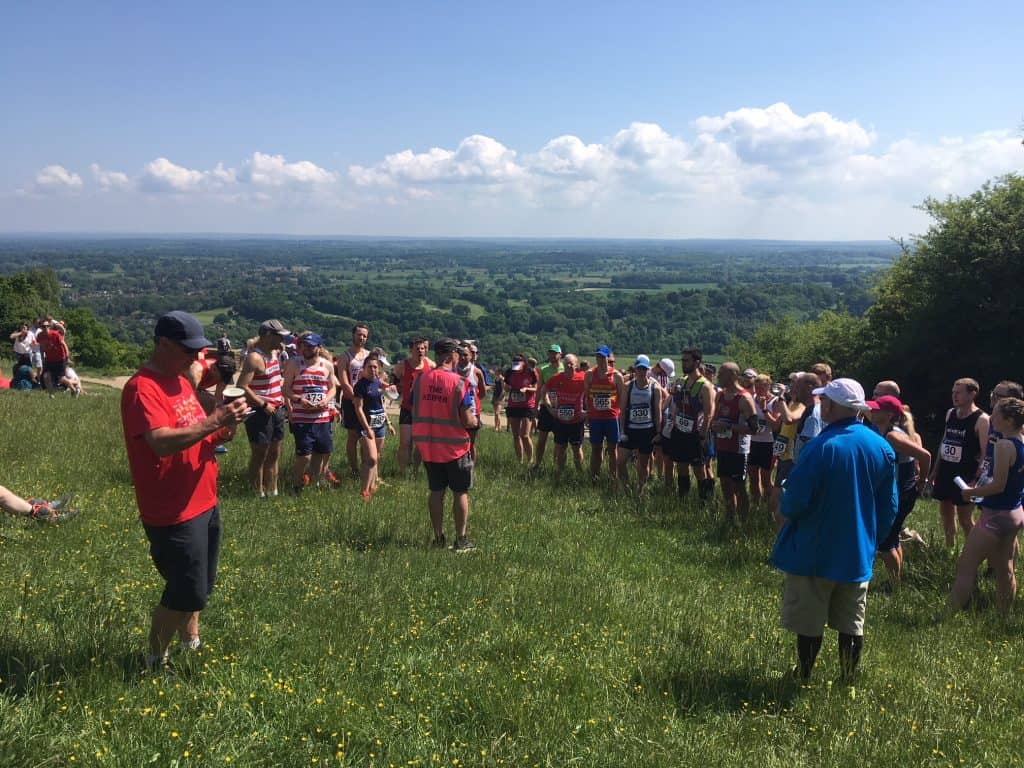 A few weekends ago, an intrepid team of myself, 10 other runners and a team driver took part in The Green Belt Relay

I asked myself the same thing too. You will probably not heard of it unless you are a member of a London running club.

The Green Belt Relay is a 22-stage running relay race around 220 miles of the Green Belt around the outside of London over a single weekend.  The course mainly follows footpaths, towpaths or minor roads. It’s organised by The Stragglers running club

It starts at Hampton Court, Saturday 8.30am and ending in the Hawker Centre, near Kingston upon Thames, Sunday at about 6 pm.

It has been going since 1995 and this year involved 50 teams.  Teams are made up of 11 people, and each runner runs one stage each day. Although the race is a relay, each stage starts at a fixed time and a cumulative team time is calculated.  Generally, the next leg starts before the previous one has finished.

I was asked to join a team that had entered from BMF Bushy Park. As you can imagine, trying to secure 11 runners across a whole weekend, that have no other events planned (Hackney Half) and are not prepping for something else or injured is pretty difficult. So, the team chopping and changing a little over the last few weeks.

Not only is securing a team tricky, the logistics of having everyone in the right place at the right time, to start and to be collected is an immense job in its own right (as can be seen from a snapshot of the excel spreadsheet below). 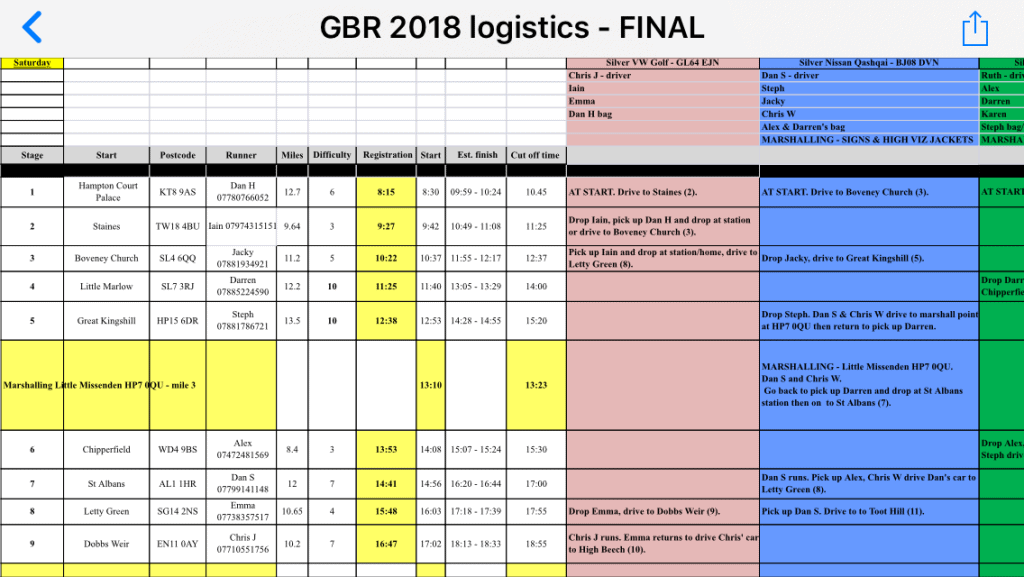 The teams stay together in a number of cars, leapfrogging each other to drop, support and pick up runners (whilst also marshalling and providing water at a couple of stages). They also stay overnight in Essex and “prepare” for the second day.

The stages average 10 miles but can be anywhere between 6 and 13 miles and are graded on difficulty due to complexity, hills and terrain. I did Stage 2, Staines to Boveney Church (Eton) (9.6 miles Difficulty 3) and Stage 21 Ripley to Walton Bridge (8.4 miles Difficulty 2)

As I was unable to commit my whole weekend, but I got a great flavour of the Green Belt Relay over the Saturday morning and Sunday afternoon. 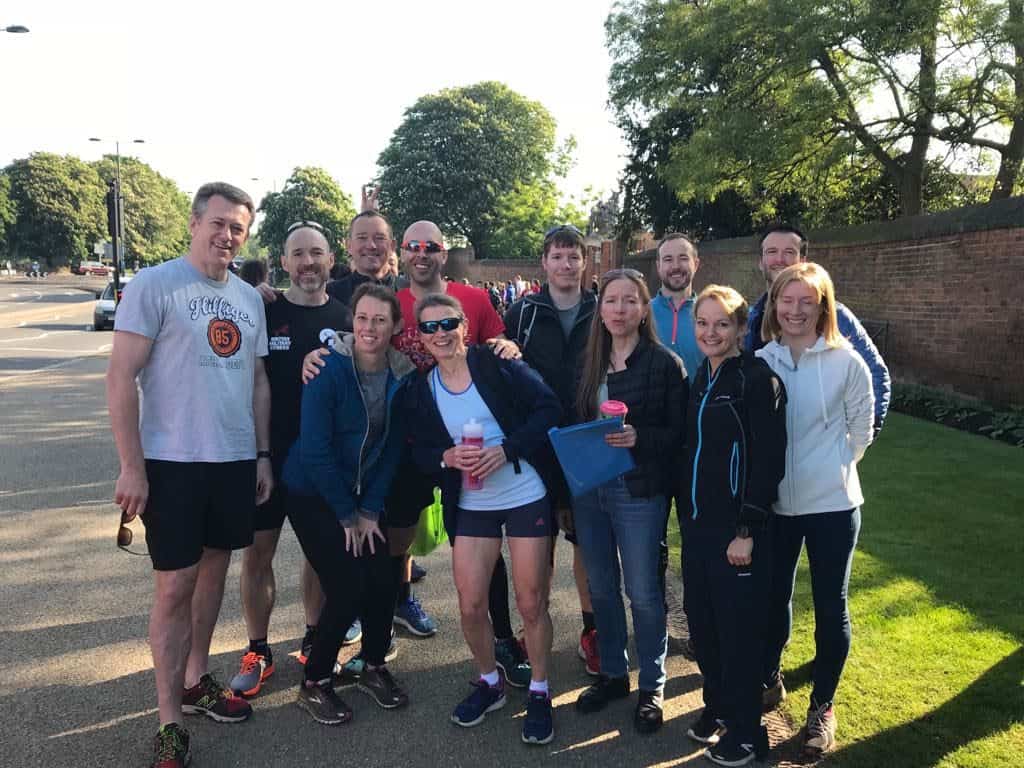 We met a Hampton Court Palace for the 8.30am start and to see our first runner Dan, off and I was then whisked to the start of my leg some 10 miles away. Each leg is not fully marshalled, only at key parts and road crossings, so every runner has to carry a map and a phone (to which routes can be downloaded). There are small signs and sawdust lain on the ground to provide some direction. You check in with the organisers at the start of your stage, who note down your bib number. Your time is then taken at the end of the stage.

I got to Staines in plenty of time and prepped myself, revising the stage and finding a secluded place to relieve my nervous bladder. 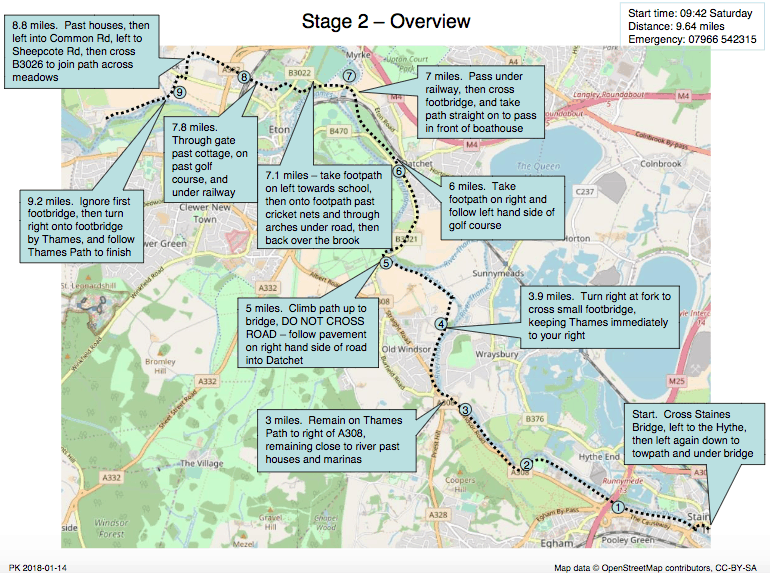 I can’t speak for the toughness and complexity of the other stages, but mine were fairly simple, lots of rivers and canals to follow. As a first timer, I think the team went easy on me. My plan was also to stay in sight of other runners as I’m prone to a rush of blood to the head and would end up lost after a rash decision.

We were off and the pace was high. The first 5 miles followed the Thames, then around Eton, including through the College grounds and finishing about a 1km from Windsor Castle where some couple called Harry and Meghan were getting married. I felt good throughout my run and really just concentrate on staying on course. The weather was beautiful and there were plenty people dressed up with picnic hampers on their way to catch the Royal couple’s nuptials.

I managed to hold my form. Although I knew I had a similar distance to run the next day, it was hard not to give it everything I could. My miles splits slipped through the run to finish in 22nd place in 1:15:12 (average 7.42 min/mile). I was met by a couple of teammates who dropped me back at Slough train station where I caught Meghan’s walk down the aisle on the big screen outside the station, whilst a couple of policemen hold large automatic weapons looked on. 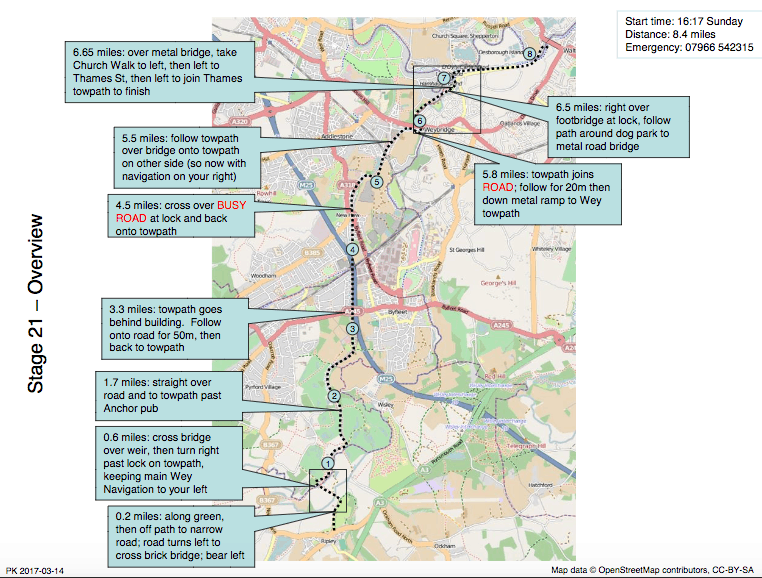 I hopped on a train at 13:30 to be picked at Box Hill station for a quick drive up Zig Zag Hill to see Karen, running Stage 19 off and see Emma finishing Stage 18. Again the weather was lovely and I had some time to relax before my stage and get the vibe of the event. There were plenty of teams milling around and I saw and chatted with a couple of people I knew from other teams and people I had run against the day before.

Even though there’s a competitive edge to the relay, its really is a race for all abilities. Although it’s pacey up at the front, many teams were there to be part of a team and for the social aspect. Teams were relaxed and chatty, cheering their teams on.

All that said, having seen how nervous Karen was before her stage and how hard the runners coming in at the end of Stage 18 were running, the competitive element of the event dawned on me. On the journey to my stage, I went quiet and leafed through the route notes. I jumped out the car and warmed up. My legs were stiff from the day before and it tried to shake it out.

Setting off on my stage, I tried to run a more balanced race, but the adrenaline got the better of me and off I went. I ran as well as I could, remembering that it was the team time that was important and not my place on the stage. The stage was along the Wey Navigation, full of dog walkers and beer gardens. A few people came past me and each time I thought “Don’t be Colin”, He was running for our “rival” team, Hampton Wick Wanderers (also made up to Bushy Park BMF’ers) but he got me at about 6 miles. I managed to hang on and finished 30 seconds behind him in 1:02:56 in 23rd place (average 7.47 min/mile) 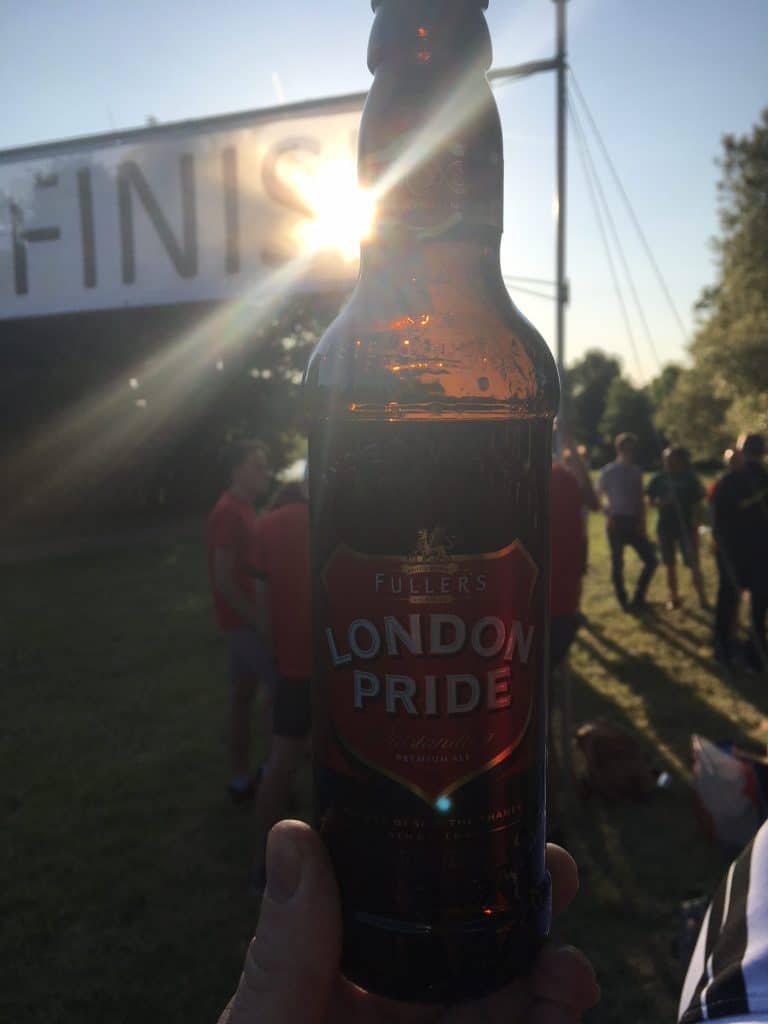 With all runners having finished their stages and the final leg having started, the atmosphere was bustling as everyone piled in their cars and mini buses to get to the finish at the Hawker Centre. I found my bag, got changed and joined my team waiting for Gary, our final runner to come in. We chatted and enjoyed a couple of beers in the sunshine and got a chance to talk with a few of the Wanderers team as well. It was good to get to know people a little better, who you see only briefly and say “Hi” to, although 2-3 times a week. Overall BMF Bushy Park came 30th out of 50 teams in a time of 1.06:22:15. 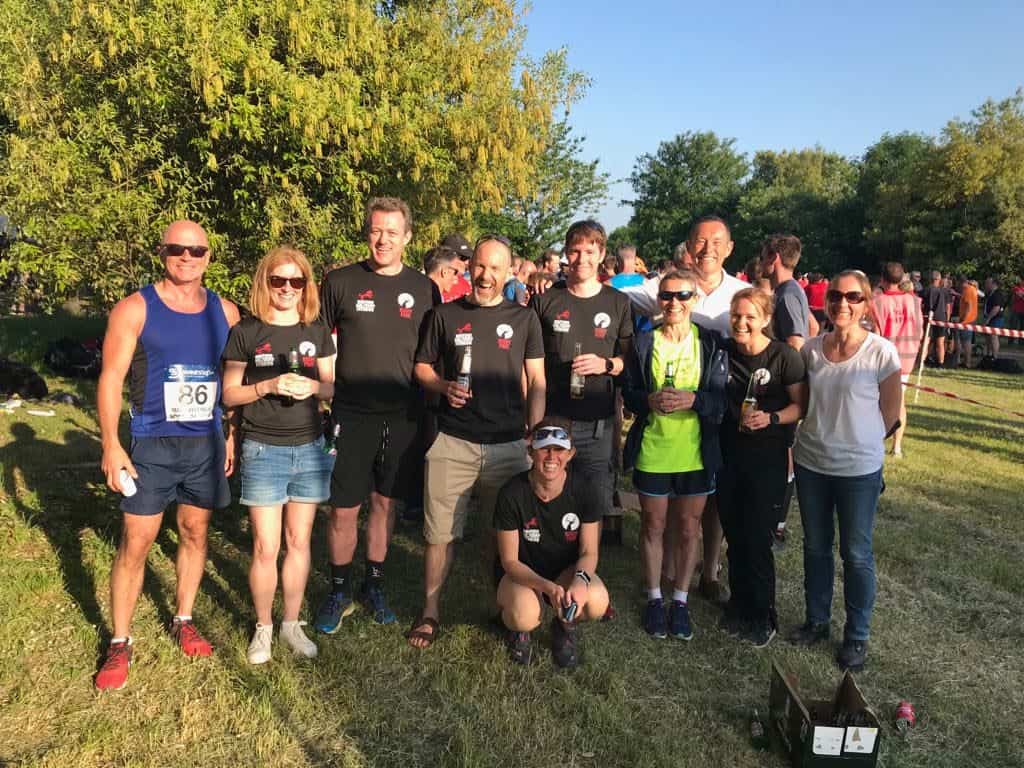 The Green Belt Relay is a unique and well-organised event, although a lot of it is down to your own organisation. Team events are always good and push you on to perform better and also a good opportunity to have a shared experience with your teammates and have a good time. If you based in the South East, or even fancy a trip to the lovelier bits of London, I can’t recommend the Green Belt Relay enough, for its friendly atmosphere and inclusivity of all runners.

If you can find 10 other runners for next May, or are a member of a running club and looking for a different kind of team event, keep an eye out for when entries open. I believe there is a limit on the number of teams that can enter to 50, due to the impact of the race, use of public footpaths and parking etc. Some teams have already their hotels booked for next year!

Thanks to the organisers The Stragglers and also to the BMF Bushy Team Captain, Chris and the team organiser and logistics/excel wizard Dan. I hope to do it all again next year.