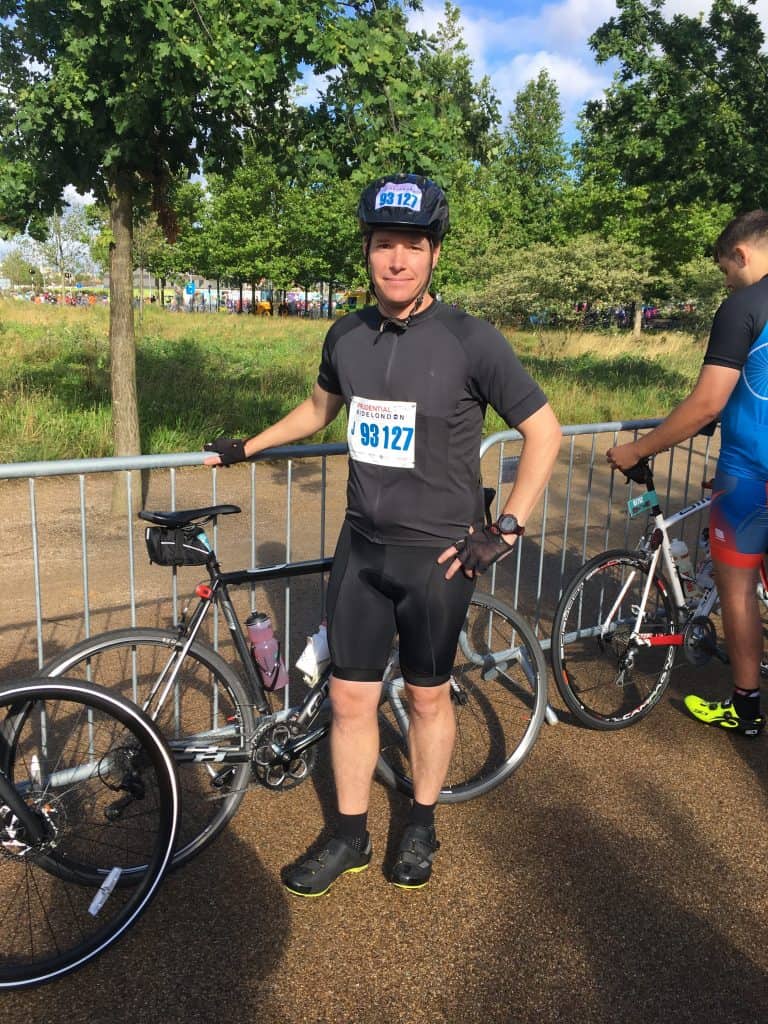 I’ve been cycle commuting on and off for 7 years. I rarely do more than 7-8 miles in one go. Two laps of Richmond Park is my max, before I free wheel into the café for a brownie! After a number of years of trying, I finally got a place in Ride London. Not the 100 but the 46!

As opposed to running, cycling needs a bit more stuff. Therefore, I was up early Saturday morning, cleaning my bike, oiling my chain and stripping it down (mudguard and reflectors removed) to make way for my numbers. I set out my kit and set my alarm from 5.30am. I was ready to go at 11 am the day before. So much for not being prepared!

I had ummed and arred about how to get to the Olympic Park beforehand. With no clear way to go without a lot of messing around, I decided to cycle the 16 miles to get there. I got up with my alarm, pulled my lycra on, shoved some breakfast down, grabbed another spare inner tube and was out the door.

I’m sure to bump into someone who knows where they are going.

Within a couple of minutes, I came across a guy with a number on his back and happily followed him. That was easy. We got to Clapham my back tyre was feeling a little squidgy. I jumped off to find my back tyre hissing. The extra inner tube had come to my saviour within 30 minutes. A quick change and I was off again. By now, more riders were turning up. I tagged on to a guy, who himself tagged on to a couple who looked the business. I asked if he thought they knew where they were going and he said he wasn’t sure – they were speaking Spanish! We all stopped for photos on Tower Bridge!

It was still only about 7.30am and the roads were clear and the ride was very pleasant. I was very conscious of conserving my energy, unsure of what laid before me. With directions from a couple of marshalls, signposts to the start suddenly appeared and the number of cyclists began to swell. Before I knew it, there was a long line of us, and I was at the blue start next to the baggage trucks. I dropped my bag and swapped my contacts for my sunglasses. Luckily the sun had now come out, to keep me warm. There was still an hour before the off. 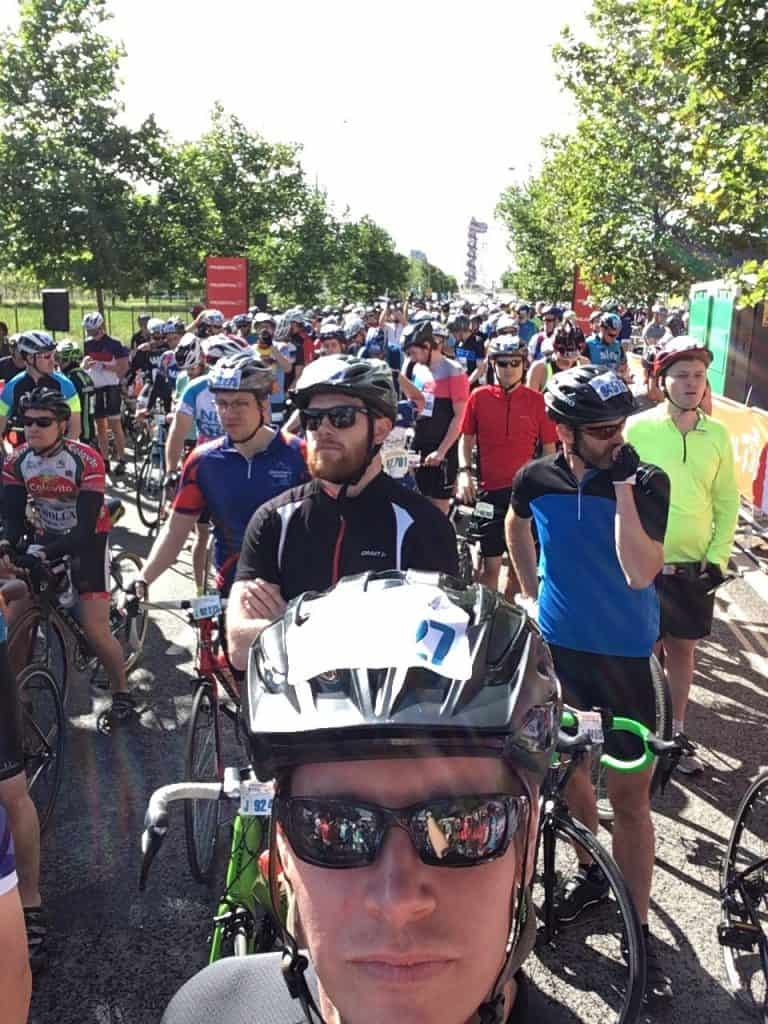 I joined the entrance to my wave and we slowly creped forward. We were the very last wave off at 9.45am. The atmosphere was fantastic. Many people seemed to be in the same boat as me, many first timers who had no idea what to expect. We chatted about training, where we were from and our expectations. Lots of nerves and excitement. I downed a beetroot shot, ignoring the old adage of don’t do anything new on race day. Finally, we were the only ones left and the countdown began. We were off!

The roads were fairly dry now and I let the adrenaline settle, as not to be a complete tool and go roaring off. The road opened up into three lanes and I clicked down the gears. Some unfortunate souls had punctured in the first miles, but everyone seemed to be helping each other out.

As my confidence grew I started to pick up the pace, surprising myself with the speed as I rolled through the A-roads of East London. By habit, people were staying left and the quicker route seemed to be down the right. As a tunnel (the Limehouse Link tunnel I believe) appeared, only me and one other rider took the right-hand tunnel. We checked with each other hoping that we were going the right way and this side was definitely closed!

Before long we were in the City and flying through Trafalgar Square with the cheering crowds. It was where the nerves and imposter syndrome disappeared and really started to enjoy myself. Taking in the City and being able to cycle freely on closed roads. This is how the professionals must feel. Westminster and Knightsbridge flew past in a blur. I looked down at my Garmin. Over 10 miles already gone, in just over 30 minutes. Whoa, this was going by quickly.

I was managing to (as my friend Geoff would say) keep laying the power down. On my commute, this tends to only be possible for 2-3 minutes at the most. Hammersmith and Chiswick ticked off. Oh, grass! I’m in Richmond Park. Ok, I thought-I know all the roads back to the finish.

I kept my powder dry for another couple of minutes as I knew Sawyers Hill was in front of me. My nemesis that has me falling off the back of any cycling group I’m with. I didn’t go mad and kept it steady, but knew this was a one off and I wouldn’t be going around another time, so gave it some oomph. I was blowing by the top but sucked it up and ploughed on. I was tempted by the drinks stop, but I was on it and clicked back up to the big ring.

20 miles down and just over an hour gone! This was going to be well within my 3-hour goal (which I thought was already overstepping the mark). I squeezed an energy gel down, pretty much as a just in case. I was feeling great and just wanted to keep going. I hope I don’t bonk! 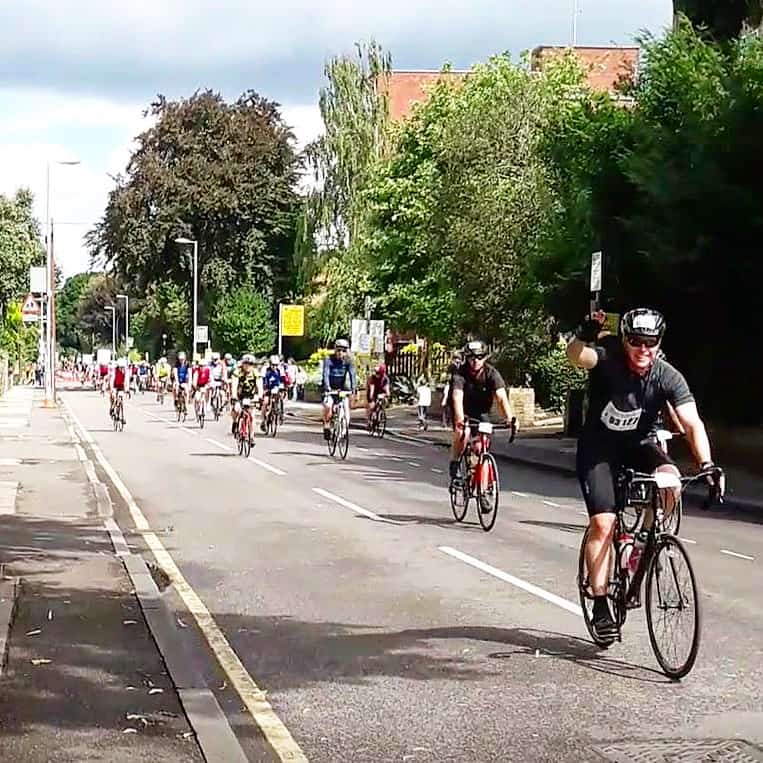 I waved to my work colleague Paolo (who snapped this great photo) as I exited the park and turned into Kingston. The crowds were great and a big smile beamed across my face again. I cycle these roads almost every day and going the wrong way around the one-way system was a bit surreal. I continued to push on to Hampton Court Palace where the 46 and 100-mile races split.

The legs had still not died and after a long drag, we were merging with the 100-mile riders. Some of these guys were shifting, and I was spurred on by the people coming past me and I tried to pick it up further.

30 miles gone! I only have 45 minutes more of this left. I was loving it! More great crowds in Kingston market place. Again very different to normal, where I pretend to walk my bike and keep an eye out for street rangers and police in the pedestrian zone. Back onto the roads of my daily commute. I lined up the corners and powered out of them, jumped out of the saddle to get over the rises. I flew through Raynes Park with no need to stop for traffic lights, buses or crossings. I passed my road and steadied myself for Wimbledon Hill.

I volunteered here for Ride London 2 years ago and handed out jelly babies and biscuits on the hill last year. It was great to finally be part of the race enjoying the shouts of encouragement from the crowd. The hill was not really that tough. With the cheers from the crowds and the inspiration from other riders giving it their all, I was soon over the top and powering towards Putney.

Nearly 2 miles of downhill. I was going as fast as I could and there were people flying past me. It was great fun, exhilarating with no traffic lights to suddenly stop at. Across Putney Bridge and into the last 6 miles. I didn’t want it to end. It was all going so quickly. My predicted time was going to be blown out of the water.

With the river on my right, I stuck my head down and gave it everything I had left, even working out the quickest and least hilly way around roundabouts. The Palace of Westminster was upon me. Two left handers through the thronging crowds and the Admiralty Arch and the sprint on The Mall opened up. As they said on the BBC commentary later, it is a little bit further than you think. With the brisk head wind, people were falling away to the left and right. I raised my arms through the line to show off my non-existent sponsor. I stopped my Garmin. 2:25:26. I was blown away, I had no idea I had it in me. A very good-hearted “well done” from the volunteer medal man was duly accepted and the normal hap hazard, but well-humoured bag drop was negotiated. 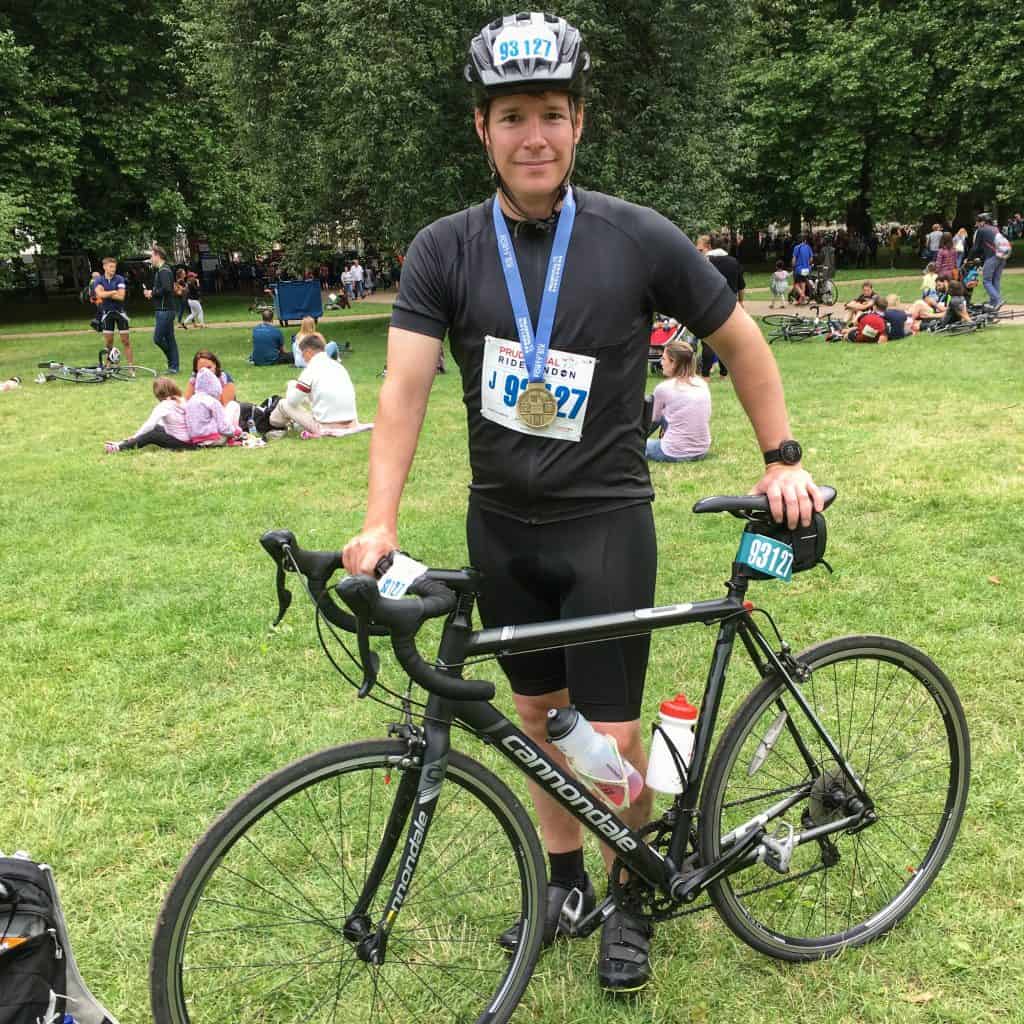 I love these mass participation events, especially in Central London. I can’t fault the organisation on my experience of the day. On only its fifth iteration, I didn’t ask one person one thing. It just all made sense where to go and what to do. We set off bang on time. Friends and family said the tracking app was excellent and almost in real time. Apart from a few people weaving around, everyone looked out for each other and had some courtesy.

There was plenty of space (number of entrants in the RideLondon 100 was cut from about 27,000 to 24,000, and the start times were spread out slightly longer). The volunteers and the crowds were fantastic. The almost perfect weather also helped. The meet and great was well situated, with food and drink available. I smiled at many things during the day and there were some great scenes out on the road. The team of Brompton riders in full Brompton team kit, at full tilt, dinging their bells and having a ball was one of them.

The Prudential RideLondon-Surrey 46 was created specifically for newer cyclists and also younger cyclists, who are new to cycling on traffic-free roads, and in that regard, it is a massive success. Did I say I enjoyed it? I will definitely be looking out for different cycling events and this will probably push me onto bigger things. Possibly a self-organised London to Brighton or the Dunwich Dynamo. 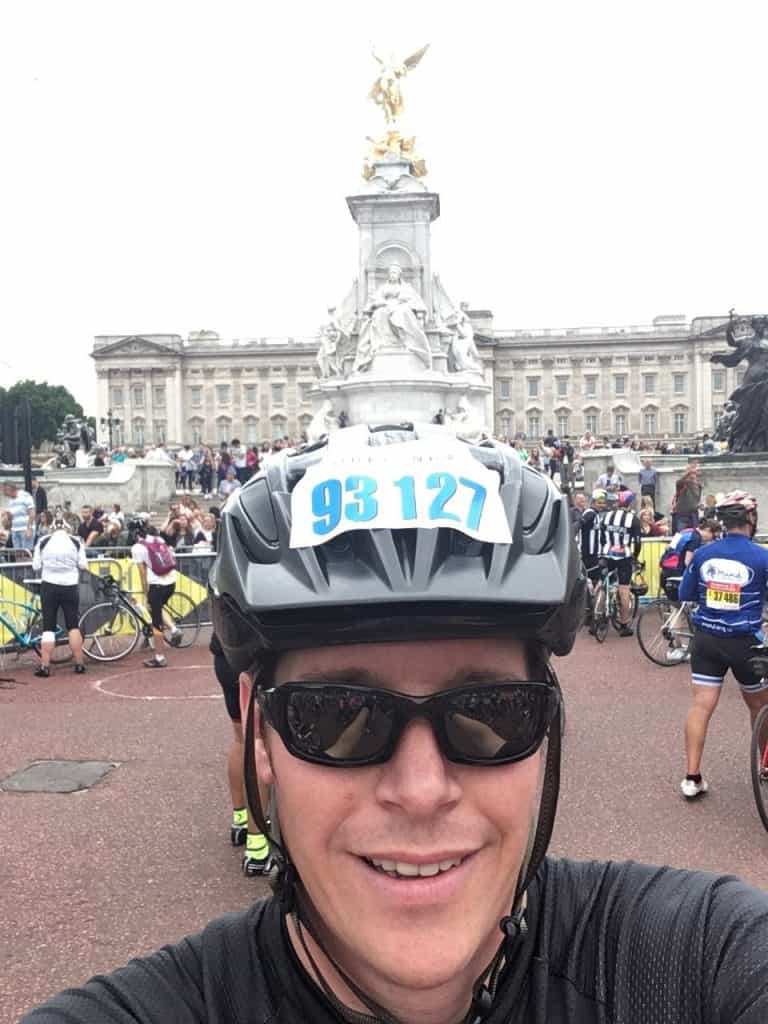 It was good to see a good gender balance in the 46-mile ride (about 35% women) and so many of them showing the boys a clean pair of wheels. One of RideLondon’s stated missions (as a legacy event of the London 2012 Olympics) is to get more people physically active and in that case, I feel it’s working.

How I could keep pushing for over 2 hours, I don’t know. Was it the 7 miles x 2 daily commute? Was it the beetroot shot? Possibility it was closed roads, other riders, adrenaline, enthusiasm and excitement with a splash of competitiveness thrown in. The Ride London 46 is really doable. You need a bit of kit, but you never know, you could find your thing. Just like I might have.

Did you take part in the 46 mile or 100 version of Ride London? What did you think? Leave a comment below.