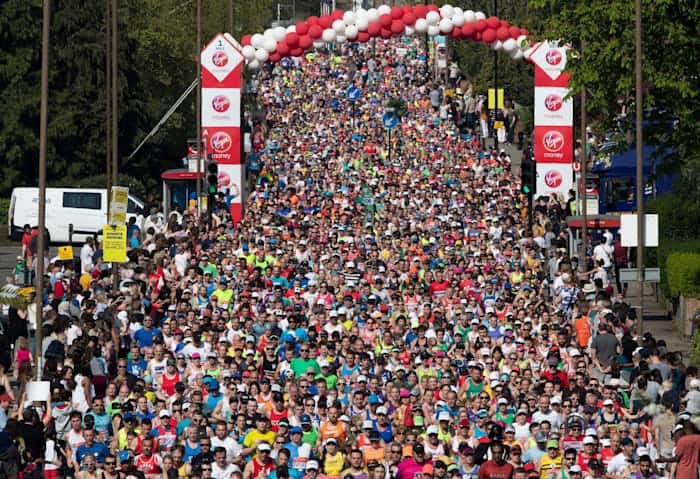 I’ve been contemplating how to run the London Marathon in 2 weeks time. In my research, it’s come up a few times that I should run a negative split.

My current plan for the London Marathon is to do 9 min/miles and come in under 4 hours. If I’m honest, I’m probably going to go off a little quicker, bank some minutes and then if I slow down, I’ve hopefully got something in the bag, so to say. Therefore, run a positive split.

However, everything I’ve read and my own (sensible) thoughts on it are – take it easy at the start and then maintain or increase the pace. Therefore, run a negative split.

Negative splits are the holy grail of distance running, especially with elites. It is thought to be the best way to achieve a quick time. There are evidence and examples either way, but does it work for the non-elites?

So, what to do? I think it really comes down to is – which kind of risk taker are you?

Both plans have their own risks.

Negative split – Do you trust yourself that you will have the pace in the second half and maintain it for a distance you’ve only done a few times or maybe never?

Positive split – Do you trust yourself that you will not go off too fast in the first half and not hit the wall in the second?

For any regular readers, you may know I’m definitely a purveyor of positive splits, and there are many similar tales of me crashing in the latter miles. This comes from my first marathon, London in 2008, when I when out controlled, finished really strong and felt I left a lot of time out on the course.

Whilst this practice can work over 5km, 10km and you can survive a half, it could be suicide for a marathon. Let’s do a pros and cons list-

Pros of a negative split

Cons of a negative split (doing a positive split)

How to run a negative split

I may not be your greatest exponent of this, but most of this is a reminder for me as much as it is for you.

Start slow – The first few miles might feel really slow, particularly after your taper, but there’s a long way to go. Run the first 3 miles as slow as you dare, keeping your heart rate low and breathing easy.

Keep it conversational – Speak to the people around you. Make some new friends. I much prefer running with people and talking takes your mind off it for a few mins. Meeting people and chatting to people will be the bits of the marathon you remember.

Let them go – If you are running with someone (by their side or behind them) and they start to edge away, let them go and stick to your pace and plan.

Break it up – Break up the race into sections and concentrate on only the current section. 6 mile or 10 km or good sections you will commonly know.

Trust yourself – Trust your body and your training that you will be able to speed up during the race. If you conserve your energy during the early part of the race, it will be there for you at the end.

Focus – Focus on staying strong. It’s gonna hurt, whatever you do. Be mentally prepared for this and be ready to dig in in the latter miles.

Know your pace times – Write your paces on your arm or there are normally pace wristbands available at the London Marathon expo.

Be adaptable – not everything will go to plan. An unplanned toilet stop could make you lose your nerve, but stay with it, don’t change the plan drastically.

Be prepared and ready to go – See my preparation tips post here. It’s one of my most popular posts and I’m quite proud of it! Don’t let 17-18 weeks of training go down the train, for a stupid decision in the days beforehand. Be primed and ready. Don’t leave anything to chance.

Trust the process – You’ll be going into your marathon or race feeling better than you have for all those long runs. You’ll have fresh legs, be carbo-loaded, hydrated and rested.