I previously ran the Thames Towpath Ten 7 years ago when I was flirting with running and thinking about being fitter. Back then it was a beautiful Spring day and we went for beers and burgers afterwards down by the Thames.

This year Spring brought grey cloud, drizzle and temperatures edging towards 10 degrees C. The biggest decision of the morning was long sleeves, shorts sleeves or a vest. With the incessant precipitation and bus replacement services I decided to drive to the race, which was a good move and there were no issues with parking.

I picked up my number, attached my timing chip and managed to pin the number on straight, (I have a bugbear with professional athletes. You‘re on TV, representing your country. Put your number on straight) and stripped off. I went with the vest (my new club vest) and contemplated joining the toilet queue or standing around near the baggage tent. Luckily I bumped into Dina, a fellow BMF’er, so I had someone to chat to. We both make disparaging comments about our form and training.

As the portaloo queue dropped, I took my chance joining it, banking on that they wouldn’t start the race without us. I was correct as the starter came over to say we had 5 minutes and to be as quick as we can. My warm-up was the 100m jog to the start and within a couple of minutes, we were off. The start wound around the starting field (a convenient way of getting the correct distance). I instantly regretted not pushing further up the field (not believing in myself and being too polite).  The narrow route meant I was stuck and had to jog fairly slowly as the runners spread out. This did quell the normal adrenaline rush to go off like a rocket. Once out on the road, I found my rhythm quickly, so in the end, it served me well.

I had decided to wear my Wimbledon Windmilers vest and represent the club for the first time. The race was organized by the West 4 Harriers club and there was a lot of running club vests being worn by members of local clubs. Within the first mile, I bumped into Imogen, a fellow vest wearing Windmiler (who I did not know) and had a little chat, wished her well and headed off towards the Thames. 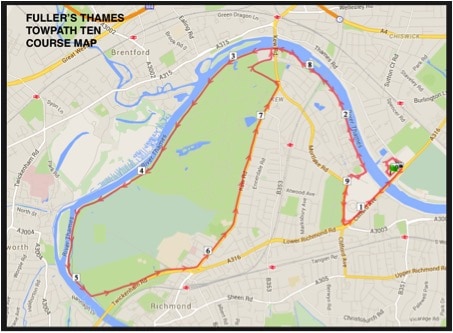 The route is clever, that you never have to cross any roads. The only time I was held up was at the entrance to somewhere that had traffic lights off the main road. The majority of the miles were along the River Thames. The field was small enough that by the time we were there it had spread out enough, so there were no issues with passing other runners on the towpath.

I went off at a pace that felt comfortable, (I hadn’t run over 7 miles since for my half marathon  last Autumn) and was surprised as I pumped in a couple of 8-minute miles. I put this down to the general excitement of the start of a race and running at the pace of those around me, even though I shouldn’t be. As the miles clicked by and I settled in with those of a very similar pace, the 8-minute miles kept coming. Oh well I thought “I’ll drop off soon, but let’s push while we can”

The marshalls at the event were very friendly and enthusiastic. Who would stand in the rain cheering on runners if you weren’t friendly and enthusiastic? Having the name of my club on the front of the vest helped as shouts of “Go Windmiler” urged me along. There were a couple of water stops along the route using plastic cups with dexterous volunteers. I managed to take one and not just throw it down my front. One of these water stations was located on the towpath, right next to the river. As conscientious as most runners might be and as well as the volunteers may have cleaned up, there was a large chance of some of these plastic cups finding there way into the Thames. Following the BBC TV series, The Blue Planet II highlighting the scale of plastic sea pollution, and the recent movement to reduce, providing a direct link between plastics and the sea should definitely be policed or contained.

As the 3rd, 4th and 5th miles were all alongside the Thames, the organisers are in a tricky place in providing a water station and the risk of plastic pollution. Definitely, something to think about in the future.

By mile 7, my pace had still not dropped. A few people were catching and slowly passing me, but my legs still felt okay and there was “no just 30 mins left, just 20 mins left” in my head. My breathing was good and I concentrated on the person in front of me. The race was flying by. At about this time, I decided to top up my blood sugar. The only thing I could find in the morning was a Beet It Sports Beetroot Flapjack. I fished it out of my pocket and took a bite. Then suddenly started to struggle to breathe and nearly choked as I mixed chewing and breathing out of my mouth. I got about half of it down before I thought better of it. I’ll get some gels next time. This was also the time I came across one of the race photographers. The lesson from this race – don’t eat a beetroot-based snack in the preceding moments before the photographers. Unless you want to have purple teeth on your photographs.

At mile 8, I turn back on to the towpath and steeled myself to not let the pace drop. A mile or so later was the only real “hill” in the race, Chiswick bridge. I worked my way up it and kicked off the top with only 400 or so metres left. Rounded the field again and crossed the line in 1:20:19 feeling rather chipper.

I collected my pint glass (instead of a medal), a banana and my bag. I took a few pictures and caught up with Imogen (the Windmiler) and headed back to my car. 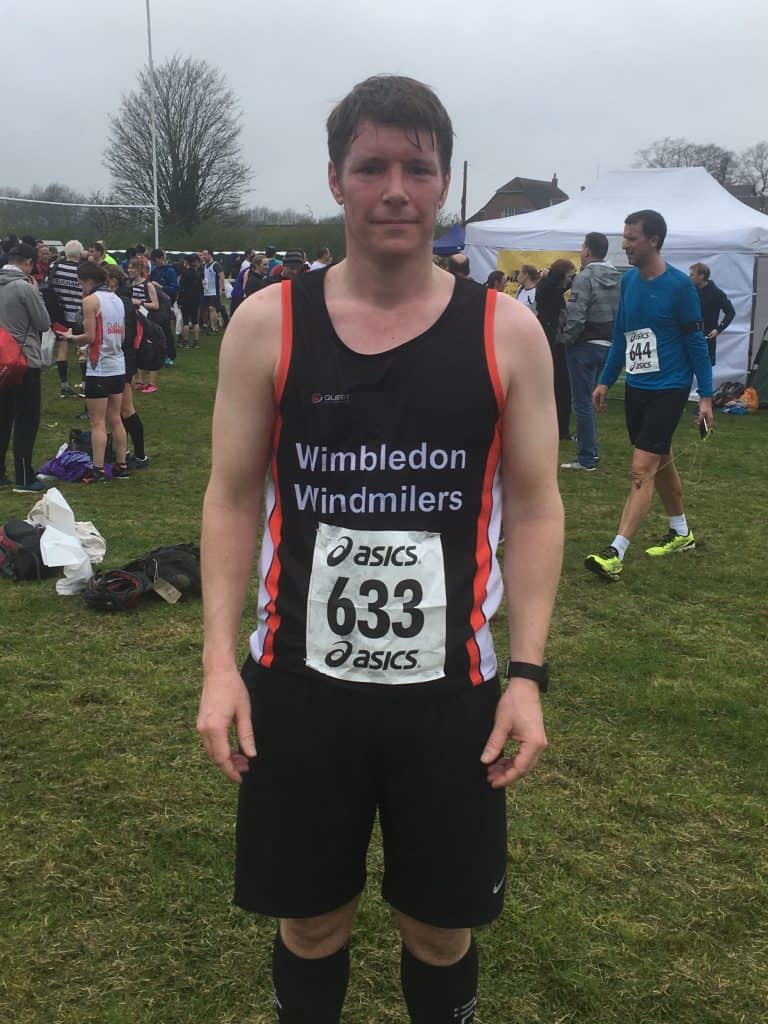 The Thames Towpath Ten is a well-organized local race that’s very enjoyable and flat. The towpath is a bit bumpy in places and requires a little care negotiating it. 10 miles is a good distance, neatly dropping between a 10km and a half marathon. It would work as a nice taper run for those doing the London marathon.

Overall – a fun race with lots of like-minded runners. An interesting distance that’s manageable but has a little bit of challenge to it. The conditions were good as the rain held off and I stayed strong through the race meaning my improved focus on running, food and rest are working.

The Wimbledon Windmilers are organising a Quarter Marathon (Trail) on Saturday 29 September 2018 at 10.30am. More information can be found here. 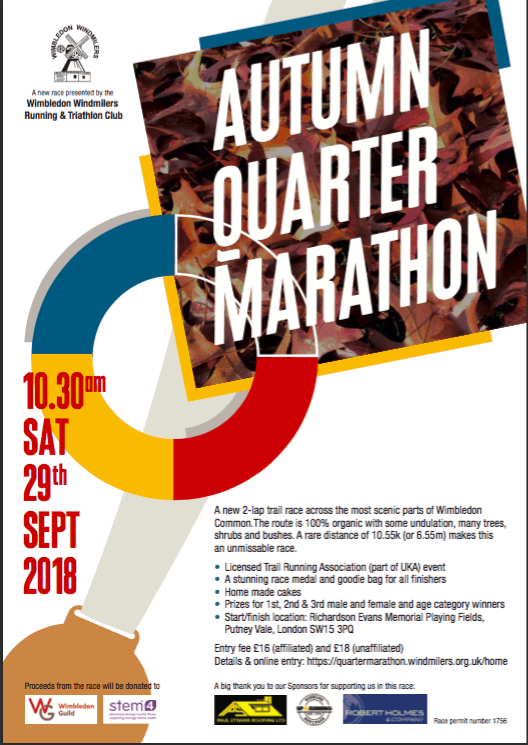