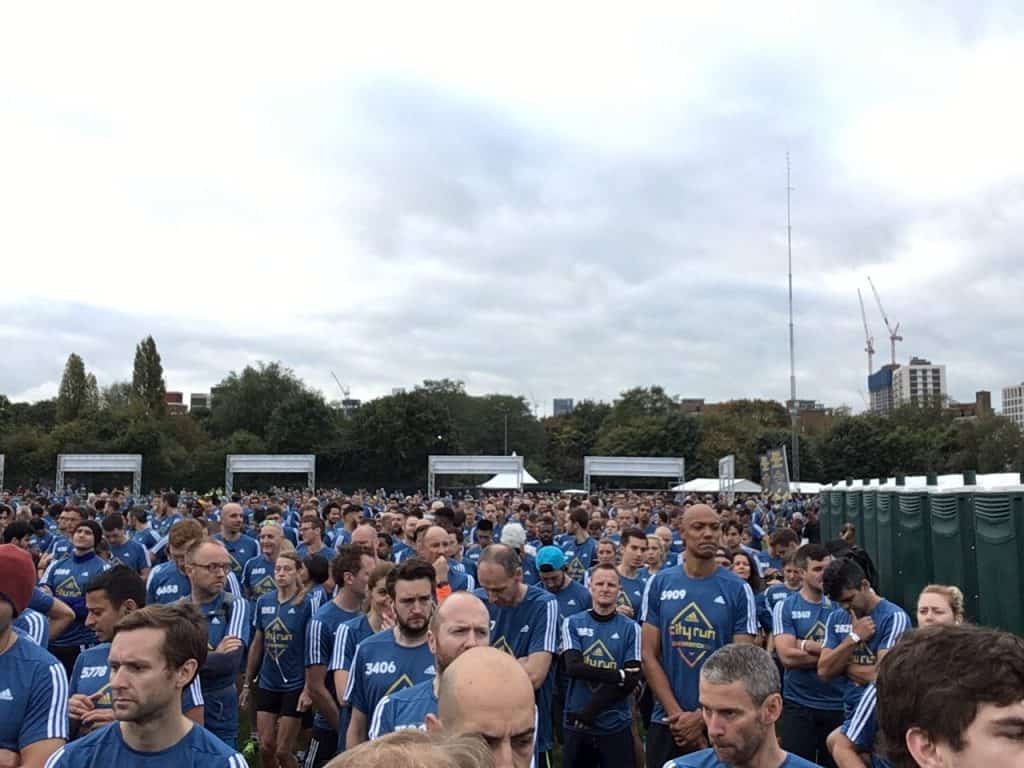 The Shoreditch 10km was the inaugural adidas City Run.

The first in a brand new series of 10k runs across your capital. The Shoreditch 10k takes in some of east London’s trendiest haunts and favourite neighbourhood hotspots. Explore the city with thousands of runners.

I’m not quite sure what the concept is. Is it about making running trendy and urban? Is it about adidas marketing and controlling their own events? Maybe its about participation?

7 am at the train station. I look around. Runner, runner, runner, they’re a runner. It was a busy race calendar in lots of places and especially London. The Royal Parks Half was also being run in the city.

As the name suggests, the race was in the inner city district of East End London, Shoreditch. A trendy neighbourhood full of cafes, bars, clubs, pop up restaurants and independent shops appealing to young hipsters but maintaining its urban edge.

The journey was easy enough and I arrived in good time to drop my bag, use the loos and get to my pen. I was not sure of which pen I was supposed to be in, but a quick check of my email said I was in Pen A. Oh, the fast pen. I wandered over to the pen and breezed in. There was no one checking. As the race number was printed onto the pre-delivered tech tee, there was no little note on the tee about which starting pens I should actually be in. There were lots of people waiting around obeying the information they had been provided, so it seemed to work itself out. We shuffled forward to the start line and were warmed up by no other than Tom Daley, Olympic medallist and world champion. 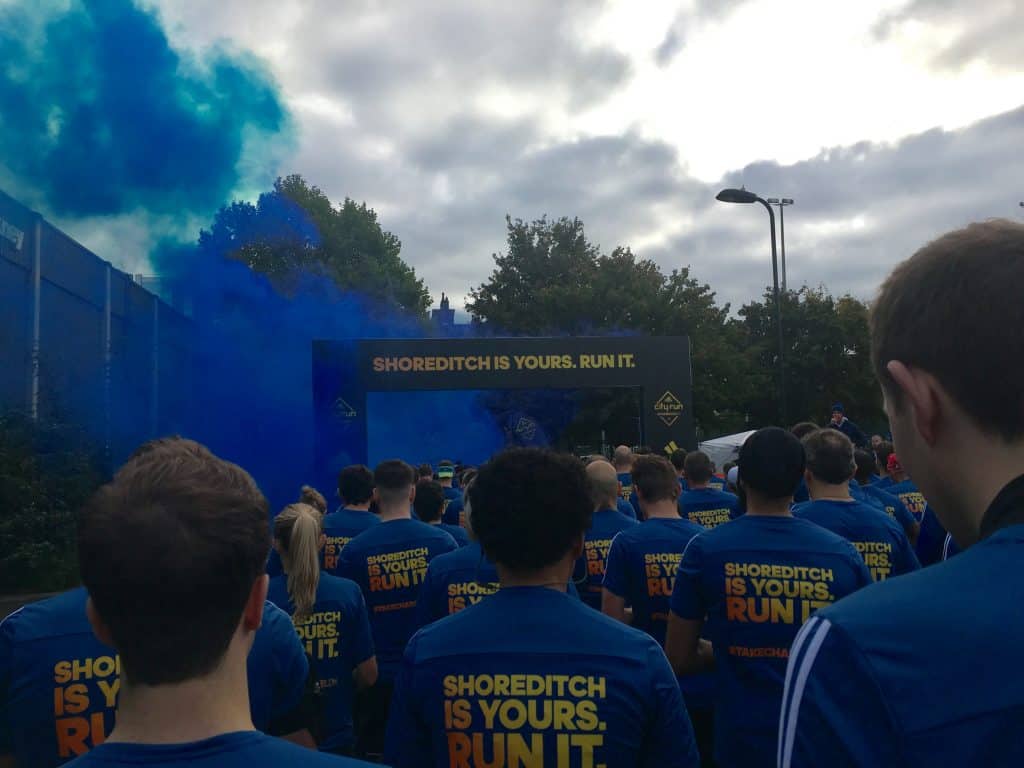 The clock struck 9 am and we were off. This was my 3rd race in 6 weeks. I had done an hours BMF followed by the 13th birthday parkrace in Bushy Park on Saturday morning. Not feeling the freshest, I set out with vigour to see what could be done with the first 10km of the year. The thought in my head was

It’s less than half a half. This is manageable!

I rolled through the first 3 miles at 7 min/mile pace and was holding my own with the surrounding runners. I picked up Strava PRs for 1km, 1 mile, 2 miles and 5km and went through halfway in 22 minutes. That left 25 minutes to do the second half and get in under my previous best of 47 mins something.

I couldn’t hold the pace and I started to count to myself to try and regulate my breathing, stay calm and take my mind of the urgent need to slow down. I did slow and had 7:30, 7:44 and 7:31 splits for the remaining 3 miles.

The course was on closed roads, which is always nice, however, there were loads of corners that required negotiation that involved parked cars and pavements, sometimes cobbles and plenty of speeding up and slowing down. What are the rules on cutting corners across the pavement in a race?

As I neared the finish, I could hear the PA announcer. I looked at my watch. 42 minutes. I can get under 45 minutes if I get a shift on. With nothing left, I was not letting the effort I had put in already go to waste. I saw the line. Sh*t, it’s on the left, why is everyone going right. There was another block to circle around.

I kept going. This was going to be close, and close it was. With a proper sprint down the last 50m, I stopped my Garmin. 45 minutes dead. Two and a half minutes off my PB from 2 years ago. The celebrations were put on hold as I genuinely thought I was going to puke on the finish line. I quickly recovered and held it together, collected some water, the obligatory Clif bar cookie and recieved my medal from Tom Daley! Cheers Tom. 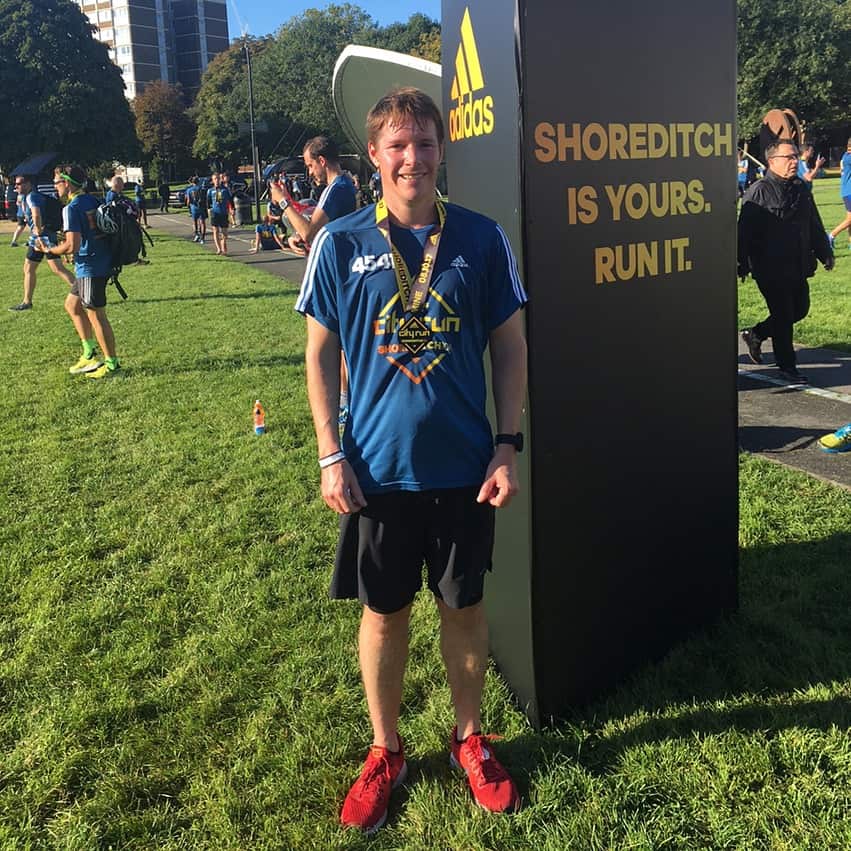 I was very aware whilst I was there, about noticing if there was anything different about this event. There kind of wasn’t. There were lots of runners who seemed interested in doing runner type things. Like turning up, enjoying a race, possibly get a PB, collecting a medal and then heading home with the least fuss possible.

There were DJs and free massages post-race, looking to create that festival feel that Virgin have also tried to do. The tech tee with the printed number has been done before and I quite like, but there is a lack of individuality when everyone is wearing the same top. The yoga sessions at the event are new, as are the training sessions in the weeks beforehand. There were discounts at local burger joints, restaurants, cafes and bars that could be used upon showing your finishers medal.

All in all a good race. Not groundbreaking, but some fresh ideas. Very well organised. Kind of enough toilets. Flat as a pancake. Plenty of starting pens. A few too many right angle turns, but what can you do in the inner city. The adidas city runs website shows that there are other runs coming soon. I hoped they could branch out to other cities, but seem to be focusing on London at the moment. Let’s see where these unique locations are.